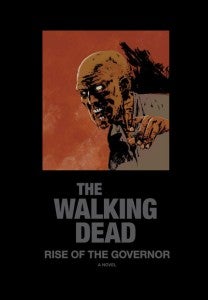 If you were wondering what Walking Dead fans might want for the holidays, then Image Comics and Skybound Entertainment might have just provided the answer. Image Comics has just announced a deluxe, leather bound, slipcased hardcover edition of The Walking Dead – Rise Of The Governer Novel by series creator Robert Kirkman and co-writer Jay Bonansinga.

"Many have asked me whether I will ever write a prequel about the lives the character lead before," said Robert Kirkman. "Well, that's basically what we're doing with these novels. And we wanted to offer the fans a special edition before the holidays."

Wait, it gets better, The Walking Dead – Rise Of The Governor deluxe edition will also contain spot illustrations by series artist Charlie Adlard. In addition, there will be an even rarer, super deluxe edition that will be signed and numbered by Robert Kirkman.

The Walking Dead Rise Of The Governor Gets Deluxe Edition