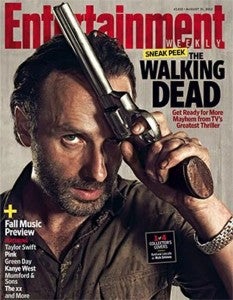 This week’s Entertainment Weekly offers up a sneak peek of season 3 of The Walking Dead. The issue features four different collector covers highlighting season 3 cast members, plus eight pages inside are devoted to the show. There are a couple spoilers revealed in interviews with producers and cast members. Some of the spoilers have been previously revealed elsewhere and some of the spoilers are brand new, but we’ve compiled five of the biggest spoilers below.

5. Lori Grimes Has Self-Hatred – When season 2 ended, Lori Grimes was pregnant and had just learned that her husband Rick Grimes had killed her former lover Shane. Apparently, both issues are going to weigh heavily on Lori, and she will experience a lot of self hatred. Sarah Wayne Callies, who plays Lori Grimes, is quoted as saying, “Lori feels horrible because good people are now putting themselves in danger and taking on her share of the work to protect her. I think it’s impossible to overestimate the amount of self-hatred going on in Lori’s head right now.”

4. Merle Dixon Is A Woodbury Hero – It’s already been revealed that Merle Dixon would be returning for season 3 of The Walking Dead, but EW offers up some details on exactly how Merle will return. Apparently, The Governor will start off a celebration by announcing a good old fashioned pig picking, and Merle will show up carrying a boar on a stick. And the townspeople appreciate the importance of a good hunter, as they chant “Merley! Merley!”

3. Milton Will Be A New Character – There is at least one brand new character being created just for the TV show. Dallas Roberts of The Good Wife and Rubicon will play a character called Miltion, who is a pseudo-scientist. Milton will not be a trained scientist, but he will be studying the behavior of the walkers in an attempt to find a solution to them.

2. Penny Might Show Up – In the comic books, The Governor kept his zombie niece Penny leashed in his apartment, and he fed her human body parts. While The Governor on The Walking Dead TV show will be somewhat different than The Governor in the comic book, producer Glen Mazzara had a very interesting response when EW asked about Penny. Mazzara said, “There are key moments in the comic book that we felt were very important to adapt into the series. I don’t want to give anything away, but our version of the Governor is recognizable to comic book fans.”

1. Other Survivors In The Prison – It turns out that Rick and his group are not alone in the prison, and we’re not just talking about zombies. According to a quote from Glen Mazzara, “The group will come to discover that there are other survivors within that prison.” However, it’s not revealed if the other survivors will be former convicts or an entirely different faction.