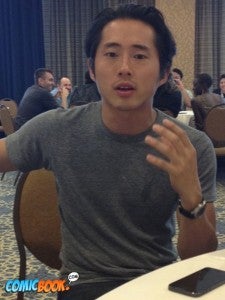 While the Walking Dead cast isn’t allowed to give away specific details about Season 4, several cast members have mentioned that the scripts for Season 4 are the best yet. In a Walking Dead panel at Fan Expo Canada, Steven Yeun shared his thoughts on Season 4.

Yeun added, “It’s going to dive into things that you’ve never seen before, and stuff that’s never been seen on television before, so get pumped.”

The Walking Dead Season 4 premiers on Sunday, October 13 on AMC.