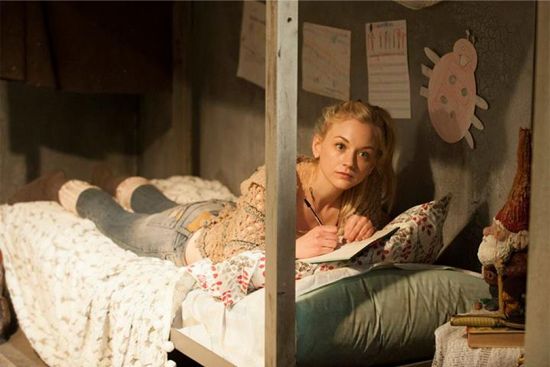 this article contains spoilers for The Walking Dead Season 4 Premiere. If you haven’t watched the episode yet, then stop reading now. During the Talking Dead after-show, Walking Dead executive producer and showrunner Scott Gimple compared one of the main characters on the show to country singer Taylor Swift.

During The Walking Dead Season 4 premiere, Beth Greene’s boyfriend Zach was eaten by walkers while he was on a supply run. When Daryl Dixon delivered the news to Beth that Zach was dead, she had a very unemotional response. Beth said, “I don’t cry anymore, Daryl. I’m just glad I got to know him, you know.”

When host Chris Hardwick asked Gimple about Beth’s unemotional response, Gimple responded “Beth is tough.” He also added, “There was an episode we did in ‘18 Miles Out,’ where she was sort of pondering suicide and being very flip about it.”

Hardwick interjected, “I know, but in the last season she had sort of become like the Taylor Swift of the group and would sing campfire songs. And now you’ve totally just set up that there’s something going on.”

As the audience hooted and howled, Hardwick laughed, “Taylor Swift singing songs onstage about her ex-boyfriends, going ‘I’ve got no tears to cry left.’”

“The Zach song is coming up,” promised Gimple.

Harwick also pointed out that Beth seemed to hold onto Daryl for just a second too long in that scene. Gimple replied, “I will just say…and I’m not even entertaining that. But I’m saying that scene, and what she laid out in that scene, her emotional reaction to that, and Daryl’s reaction to her reaction is one of those things that will play out throughout the season.”