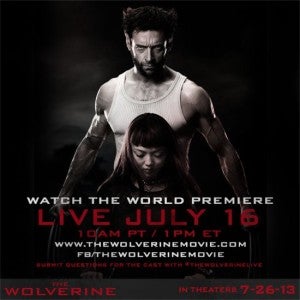 As thousands of comic book fans start to head toward San Diego for Comic-Con, the director and cast of The Wolverine will be an ocean away for The Wolverine world premiere, which is scheduled to take place in London.

For fans that can't make it to London for the World Premiere, 20th Century Fox will be live streaming the event on the official Facebook page for The Wolverine movie. Fans can also submit questions for the cast via Twitter using the hashtag #TheWolverineLive.

The Wolverine world premiere live stream starts on Tuesday, July 16 at 1 PM ET. The Wolverine premieres in movie theaters in the United States on Friday, July 26, 2013.