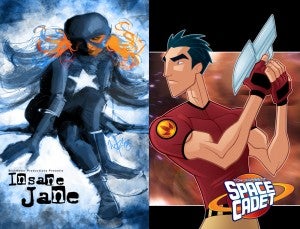 Bluewater Productions, the comic book publisher probably best known for their short-form biographical comics, announced last night that  they had a pair of titles heading to the silver screen, thanks to a partnership with Pleroma Entertainment. According to a  press release, Pleroma and Bluewater have an overall agreement that gives Pleroma right of first refusal when it comes to Bluewater projects and the studio has chosen to option Insane Jane and Tom Corbett: Space Cadet.

"The partnership between Bluewater and Pleroma presents an opportunity for us to produce two, if not more, of Bluewater's most popular books as feature films. It is a partnership that I have personally looked forward too for many years and it is a good thing for both companies. Together, we are going to make great things happen," said Ray Brown, CEO and producer of Pleroma, in a statement.

According to the press release, both of the titles are already collected as graphic novels and available online. While none of their titles have made it to film yet, Bluewater has made deals with studios in the past, including Universal and Paramount, for projects like Legend of Isis and 10th Muse.

“We could not be more thrilled to team up with Pleroma Entertainment. Insane Jane and Tom Corbett: Space Cadet are two comic books that we thought would make great properties for film and television when we created them,” said Darren Davis, President of Bluewater Productions.