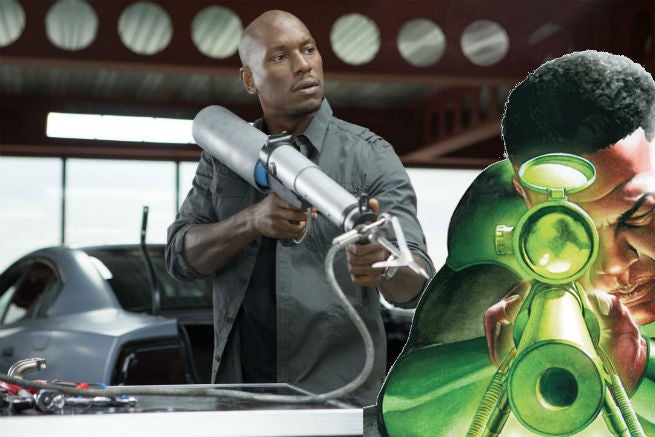 Tyrese Gibson has once again teased the possibility that he will be Green Lantern, this time posting a photo of himself in the Ryan Reynolds version of the character's costume with the caption "See you soon....".

The actor, who will star with Shazam villain Dwayne Johnson in the forthcoming Furious 7, started campaigning for the job in January, saying "Rumor has it..." below a watermarked version of the same photo.

For the better part of a week he continued to post about it on Instagram before reportedly taking a meeting with Warner Bros. about the job.

This is the first time in a while that Gibson has posted about Green Lantern, and seemingly suggesting that he's got it is certainly a good way to get people talking. With the Furious 7 press tour in full swing, expect him to be asked about this plenty.

After a short, aggressive campaign followed by a meeting with the studio, such a bold message likely means he has an answer one way or another, and that this is either soft confirmation that something is happening or a passive-aggressive way to get back under consideration if the studio said no.

Gibson was rumored for the role of John Stewart, one of a number of human Green Lanterns from the comics, back when Mad Max's George Miller was working on Justice League: Mortal, although the part eventually went to Common instead.

Fans and press seem divided on whether Hal Jordan, John Stewart or someone else would be the best Green Lantern to headline the character's next solo feature. The arguments for Stewart, besides just diversifying the mostly-white Justice League, are that Stewart is recognizable from the long-running Justice League and Justice League Unlimited TV series, and that Hal Jordan "had his chance" as the star of the Reynolds-starring movie that failed at the box office.

Green Lantern is expected in theaters in 2020, though most rumors suggest that the new Green Lantern will be introduced in the third act of Justice League Part One in 2017. The character is, thus far, the only expected member of the big-screen Justice League without a casting announcement attached.

Note: The original headline for this article stated that Gibson tweeted the photo, which is inaccurate. He posted it to Instagram.

Tyrese Gibson Posts Green Lantern Selfie, Says "See You Soon." Does He Have the Role?