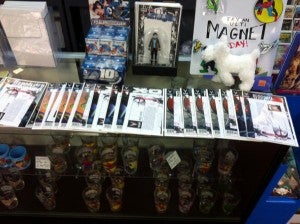 Message board posters at ValiantFans.com have launched a new program to give away duplicate copies of their comics (or copies rendered redundant by digital or collected editions the fans might own) to new readers in the hopes of building a fan base for the critically-acclaimed books.

Titles like Bloodshot, Archer & Armstrong and X-O Manowar are some of the best-reviewed comics in the industry, but it's always a challenge to find new readers for non-Big Two, non-licensed properties. A fan named Carson, seeing this and knowing that a healthy fan base is necessary to keep your favorite books in print, saw an opportunity to clear out some of his clutter and bring the good news of Valiant to a whole new group of readers who might not otherwise buy the books.

Here's what Carson had to say, as quoted on the site: 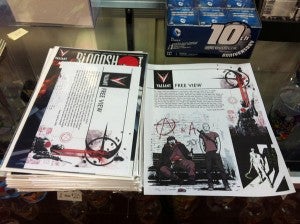 I, like many of you, have a hoarding problem. I buy more comics than I need, and then I have headaches trying to safely store them. I participated in Paradise's many awesome deals, but that left me with many doubles I simply don't need.

I've found a solution for that problem, and hopefully it is one that will help grow Valiant sales.

I created a new kind of Valiant Free View: one where you give fellow patrons of your LCS their first Valiant comic.

It was simple, and you can do it too! 1. First I created a flyer explaining why this awesome free comic ended up in their box. [I'll send you my PSD if you want to work off of that] 2. Then I printed 20 copies and inserted them into bagged and boarded Valiant #1s (Bloodshot, Harbinger, or XO). 3. Then I gave them to my LCS and asked that they stick them in the pull-boxes of readers that have similar interests. So, if someone likes Conan or Iron Man, give them a copy of XO. If someone likes the Punisher then give them Bloodshot, etc. They thought it was a great idea and were happy to do it.

So, my doubles are now all cleared out and I feel better about trying to grow the Valiant fan base!

At least one other fan, who goes by the message board handle Caxiotis, has followed suit, offering up nine of his own "extra" Valiant Comics for free to readers at the Des Moines, IA store that he frequents. According to Caxiotis, his local shop reported that at least three of the nine copies resulted in new subscriptions.

The Valiant Free View message that Carson included with his copies, and has offered up to folks on the Internet, reads as follows:

"The Valiant comic you are holding in your hand is a gift, from one comic lover to another. I love Valiant, and I want them to succeed. To that end, I'm willing to give away some of my Valiant horde to like minded readers. Ultimate Comics thinks you will appreciate Valiant too. IMO, Valiant characters have more depth than most from the big two. There's not a lot of black and white characterization here. There's a lot of grey areas. There's moral ambiguity and realistic motives for the ways characters behave. Sure, there's bad guys, but you can almost understand why they act the way they do. So, enough of my blabbering. Please, crack open your free book and have at it. My only request is that if you like what you see, pick up the next issue. If you don't, please give it back to the guys at Ultimate Comics to pass it along to another like minded reader. Also, feel free to share your favorite non-Valiant book with me if you feel so inclined!"

UPDATE: These fans aren't the only ones participating in the program, of course, just the ones who came up on the thread we saw last night. A reader by the name of Elery Tan reached out to us as well to share his story, which includes a gallery of photos you can check out below. 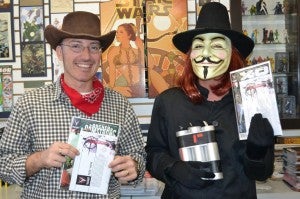 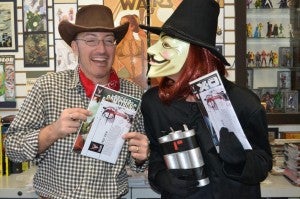 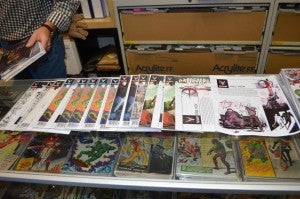 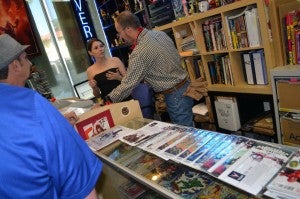