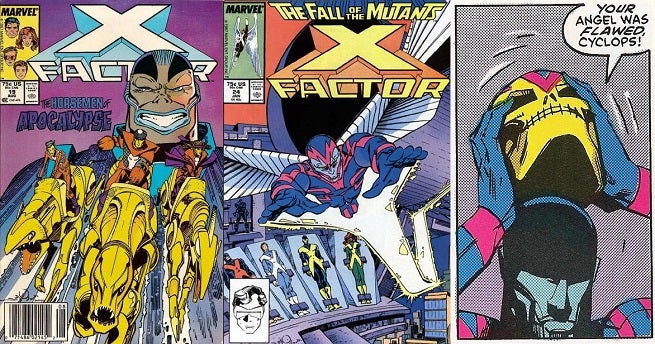 It's one of those things that's always been kind of curious: when comic book royalty Louise and Walter Simonson introduced the Four Horsemen of Apocalypse, why did one of them -- Archangel, formerly the X-Man Angel -- look so different from the others?

It wouldn't have been a question in most superhero stories; superhero and supervillain teams are often made up of a handful of characters who were unrelated prior to teaming up, and had their own look, their own adventures and their own aesthetic.  Looking different (or even being the odd man out in a group that's fairly similar) isn't all that uncommon.

But the Four Horsemen were created at once, introduced at once and had -- three of the four anyway -- a uniform look and color scheme. The fourth guy was...well, just look at him! He doesn't even have (or need!) a horse!

At the Walt Simonson Appreciation Society, reader Joshua Mahony on Facebook asked the artist about the difference.

"A couple of quick thoughts about this, always provided that you keep in mind that this was a LONG time ago," Simonson responded. "One is that I provided a color guide for Death/Archangel with I designed his outfit. I don't remember if I provided color guides for the rest of them or not. But since Warren was Death and really, the significant character in the storyline, I did want him to stand out. And 'Death', for me, is also the most dangerous of the four, and I may have wanted to emphasize that a bit by having him stand a little apart from the others."