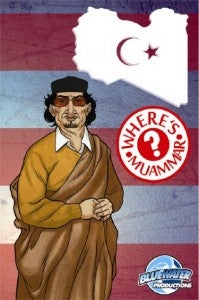 “Where’s Muammar?” focuses on Libyan President Muammar Gaddafi. With his nation at war to oust him out of power, Gaddafi has kept a low profile. The mini-graphic novel is written by Jarred Weisfeld with art by Dario Reyes, and it is being released exclusively on the Nook and the Kindle.

Creator Jarred Weisfeld has called Gaddafi the “modern day Houdini.” “He could show up just about anywhere at any given time,” said Weisfeld.

“Libya has been in the news in recent months and when Jared came to me with this idea that was so unique and out there, I couldn't resist," said Darren G. Davis, who is president of Bluewater Comics.