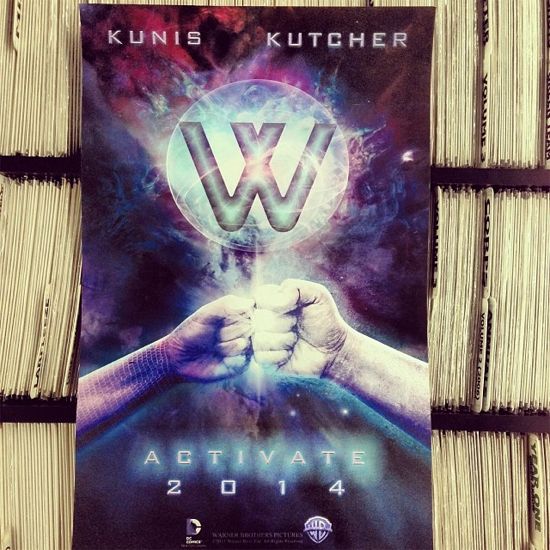 Remember the Wonder Twins movie poster that showed up at MidTown Comics, then quickly went viral online after they tweeted an image of it. The poster spurred all sorts of theories ranging from Warner Bros. actually working on a Wonder Twins movie to it being a promotional stunt for the Entourage movie.

It turns out the real answer was neither of the above. Marc Tyler Nobleman, who is the author of "Bill the Boy Wonder: The Secret Co-Creator of Batman" and "Boys of Steel: The Creators of Superman” tipped Comicbook.com that he discovered the real truth behind the mysterious Wonder Twins movie poster that baffled entertainment news sites around the world.

In a post on Noblemania, Nobleman explains that the poster was the creation of Batman fan and BatPodcast host Pat Evans. Evans explained, “With the spate of superhero movies being released, I think it was just me thinking it would be fun to do a spoof version of one. I thought, ‘What would be the most preposterous superhero movie you could make?’ Naturally, the Wonder Twins sprang to mind.”

Evans had planned to distribute the hoax movie poster at Comic-Con, but he didn’t get it ready until Comikaze. He handed some out at Comikaze, but it didn’t really take off until he sent some copies to some well-known comic book shops like MidTown Comics. The whole thing about it being tied to the Entourage movie was just an assumption someone made online, which took off and spread like things often do on the Internet.

In regards to why he decided to pull such an elaborate prank, Evans explained, “Basically to make people think—if only for a few moments—that a Wonder Twins movie might actually be made. Sort of the equivalent of making someone believe in Santa Claus. A dangerous, drooling, and demented Santa Claus to be sure—but miraculous and magical nonetheless.”