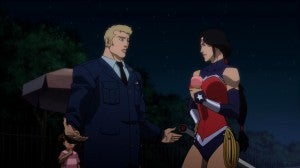 What's surprising about this image is that Wonder Woman is wearing a new costume--and still no pants!

We may be mistaken, but it doesn't look like any of the previously-released drafts that Jim Lee considered as part of the New 52 relaunch. In fact, the gloves she's wearing feel a little bit like Lee's previous reinvention of Wonder Woman's look, done for the J. Michael Straczynski run on her title.

And, of course, it's probably worth noting that she's wearing an outfit that's a bit more family-friendly, hiding her cleavage...but it will also feed into fanboy jokes. After all, they've finally given her a collar!

Wonder Woman Covers Up With a New Costume in Justice League: War