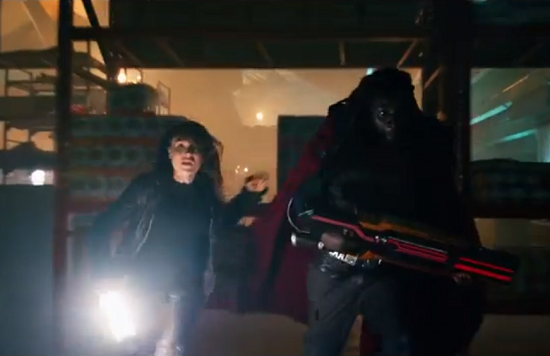 Despite fantastic reviews, great word of mouth and making far more money than any previous installment of the franchise, X-Men: Days of Future Past has had its share of fans and bloggers commenting on continuity and logic problems that could be off-putting or distracting in the film.

One such problem is that it's Kitty Pryde, not Rachel Summers, who sends Wolverine (not Kitty Pryde) back through time. Not only is this a change from the comic book source material, but arguably more relevant is that there's no precedent in comics or film for Pryde having the ability to do that.

During a recente podcast interview, Days of Future Past writer Simon Kinberg admitted that it's "kind of a cheat" and told The Q&A Podcast that he chalked the power up to being Kitty's secondary mutation -- a concept from the comics that allows for the characters' powers to evolve as they age and their bodies change -- and that it was done, in part, because the introduction of Rachel Summers would have been more complicated than it was worth.

"Rachel was in the first draft of the script of this. In fact it was Rachel that sent Wolverine back in the first draft of my script. And I had Storm having this kind of complicated relationship with her because she's the orphan of Jean, who's Storm's friend, who's dead, and Scott, who was Storm's friend, who's dead. And more than anything -- and this is a movie I had to do this a lot on -- I had to do a hypertext introduction to a character. Let me just give you the Wiki pages on who Scott is and who Jean is, and they're not in this scene, but everybody's going to have to talk about them. And then there's going to be somebody who's upset because her parents are gone...anyway, it just seemed more complicated than it was worth for a movie that already had a lot of drama and a lot of complication. I don't remember at what point in the process I switched it to Kitty but what I thought was, it's a bit of a cheat because it's not really her power, but the way I was explain it if I really was attacked is that there's secondary powers that a lot of the mutants have in the X-Men universe -- secondary powers that evolve and emerge later in life. So who's to say that Kitty -- who is capable of touching people and having them phase with her through space, why can't it be that they also phase through time if she evolves her powers?"

He added, "In fact, I had a line that kind of covered this that I cut out of the movie, where Wolverine in the future realizes she's doing this and he says, 'I guess you're taking people through more than walls, now, huh kid?'"