We here at Comicbook.com recently got second look at Christopher Nolan's Dunkirk at an IMAX event held in New York City, and what we saw definitely impressed.

The actual footage involved a longer prologue to the film's real-life story of WWII soldiers stranded on the beaches of Dunkirk, France - a fish-in-the-barrel scenario where German forces were bearing down on the tired frightened soldiers, bringing certain death along with them.

The prologue opens with the a signature Nolan musical cue - in this instance, an intense yet reserved cadence, patterned after a clock tick. The first visual is that of two young soldiers, carrying a wounded man on a stretcher, trying to make it to the end of a pier that has been smashed by German artillery attacks, and is swarmed with soldiers, all hoping to board one of the last boats out of Dunkirk, presumably before the German hordes arrive. Meanwhile, a subplot sequence shows Mark Rylance's (Bridge of Spies) character as a wealthy man with his own yacht, hurriedly instructing two young boys to undo all the ropes so that they can shove off before military officers reach their dock - presumably demanding they take on passengers. 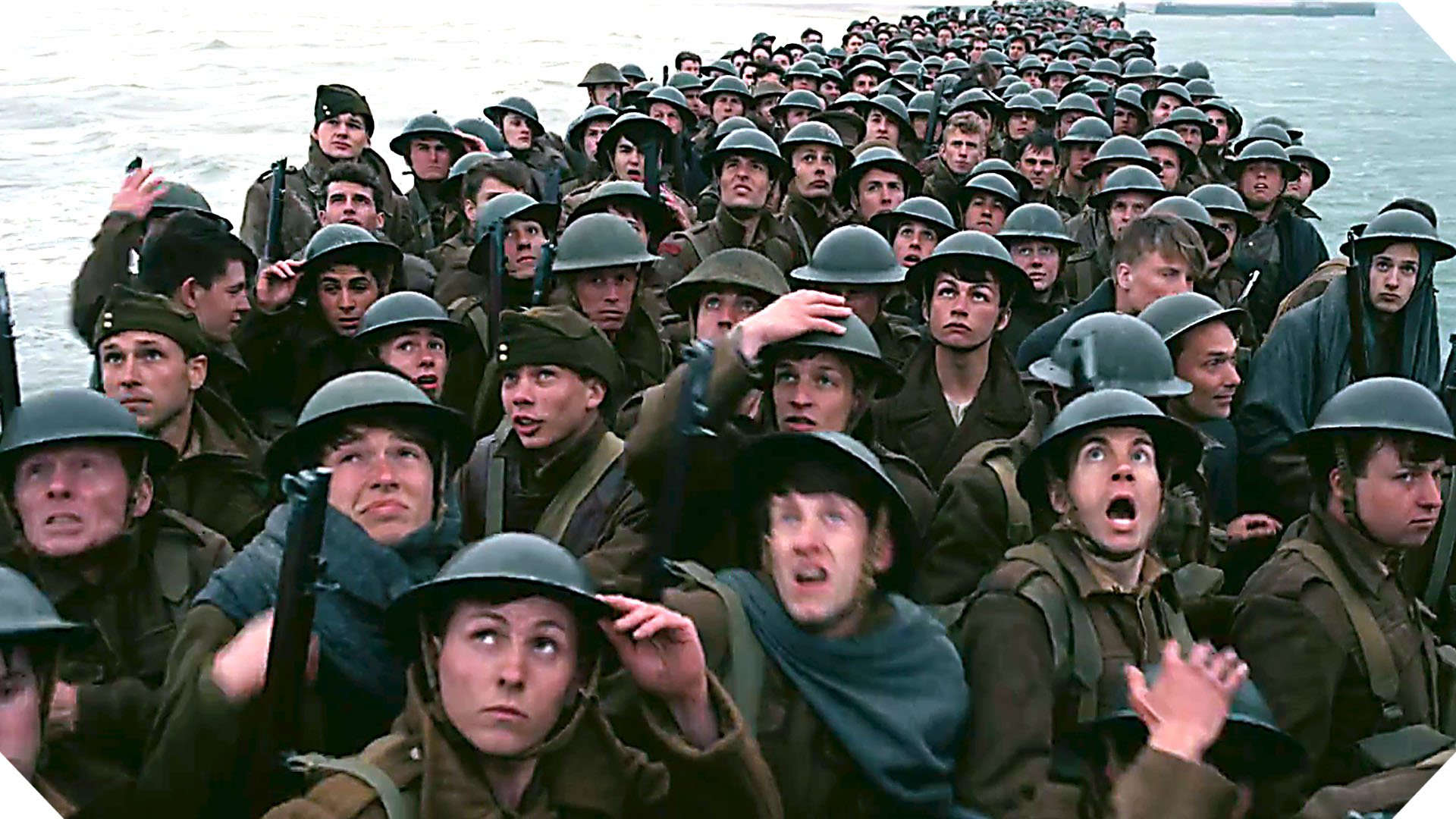 These two sequences (the two boys carrying the stretcher through a diverse throng of soldiers; the yacht taking off from dock) is spliced together with a sequence of Tom Hardy's allied pilot character, Farrier, engaged in an aerial battle with two of his fellow pilots, against German bombers approaching the Dunkirk beach. The Aerial battles are eerily still and relatively silent, opting for realistic recreations of WWII machinery and gunfire, with visual that switch between traditional third-person and video game-style first-person views from Hardy's cockpit. It's pretty intense stuff - made even more so by the fact that Hardy's plane is running out of gas. In fact, the prologue ends on the quiet sputters of Hardy's plane, running out of gas completely. Meanwhile, over the pier, we hear the sound of a dive-bombing plane - and deafeningly ominous screech of some unseen threat in the sky (presumably a bomber that made it through), bringing death to some unlucky soldiers crammed onto that pier.

Between the Hans Zimmer pulsing soundtrack and quick jumps between several different scenes at once, this was signature Christopher Nolan filmmaking - and a nice return to form after the more meditative pace of Interstellar. Truly, Dunkirk seems like it will carve out a unique niche as a war film that's just as effective as a psychological thriller. The IMAX prologue in a lot of ways invokes the feeling of The Dark Knight's opening Joker heist sequence - only the scale has been ramped way up, and the tension is much more intense than comic book fantasy, as there is always the reminder in back of mind that this was real life.

Indeed, the tension that is established from the onset of Dunkirk is palpable, and the way that the threat of death is ever-present (from the very first frame) yet never directly referenced, is truly unnerving - especially in IMAX. The expanded format is wholly necessary, allowing Nolan to frame shots in a way that directly contributes to the subtext and themes of the film. For example, in the climatic moment where we hear the sound of the Axis plane swooping down for the kill, the entire pier (crammed with soldiers) is framed in a gorgeous IMAX shot - framing with frightening clarity the terrible, sitting-ducks-in-a-row trap the soldiers are caught in. Some of them are about to die - the only questions are, how many? And how badly?

In the end, this may not be superheroes or mind-bending sci-fi, but Nolan hasn't lost a step at all by jumping into a historical epic. If anything, he may have gotten better.

How excited are you for Chris Nolan's new film? Let us know by rating your anticipation, below!