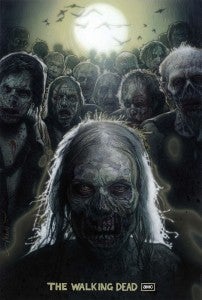 Filmmaker George A. Romero, whose Night of the Living Dead redefined the zombie-horror genre for moviegoers, has declined an offer to direct an episode of AMC's hit TV show The Walking Dead. This is one of those stories that's been floating around for about a year, but io9 seems to finally have an official and definitive comment on the matter. The director, who is currently making The Zombie Autopsies, says that while he loves The Walking Dead comics and he generally enjoys the work of former showrunner Frank Darabont, he turned down an offer to direct episodes of the show. "I love the books," MTV's Splashpage quotes from the io9 article. "I haven t seen any of the episodes. Listen I love Frank [Darabont], I know he s done a good job. I love the books, I never watched any of the episodes because my zombies are sort of my own. I didn t want to be part of it." Last week's season 2 premiere of The Walking Dead broke records for AMC, even amid concerns by fans after Darabont's departure and a lukewarm reception for the season 1 finale.

Romero Says No To The Walking Dead

Netflix's Avatar Stars Roast Each Other in New Video