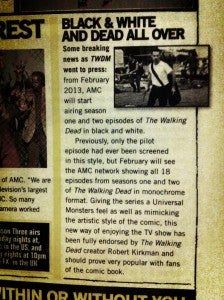 In what's probably an effort to keep the show's colossal ratings momentum going during its midseason hiatus, AMC's The Walking Dead will air re-runs from the first two seasons in black and white beginning in February, according to Walking Dead Magazine. A fan noticed the story in a physical copy of the magazine and tweeted out the photo at left, with the caption "This is awesome," and it was retweeted by showrunner Glen Mazzara. Last year, AMC aired the pilot in black-and-white, with the explanation that because the comic book publishes in black and white, there had been brief discussions of actually shooting the series that way (although it was never seriously considered). The pilot was released in black and white as part of the Special Edition of The Walking Dead: The Complete First Season. The ratings success of the special black-and-white airing of the pilot was apparently enough to encourage AMC to convert the rest of the episodes to get similar treatment. There is no indication that the full first two seasons will be available on DVD and Blu-ray in black and white.