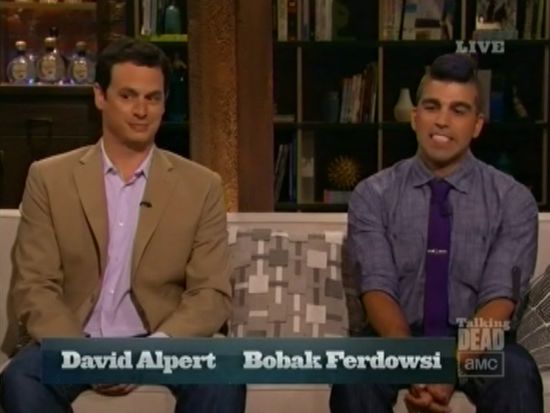 In a bonus segment for Talking Dead, host Chris Hardwick put an interesting viewer question to Executive Producer David Alpert and NASA's Mohawk Guy Bobak Ferdowsi. Hardwick asked, "What has happened to the people on the international space station since the outbreak?" Ferdowsi answered, "They should be ok, as long as they have food and water and everything, which they can recycle their water for awhile. They'll be living up there, and there probably just wondering why nobody's answering them." Alpert teased, "That's actually our season four." Hardwick then wonders since everyone is infected if they die up there would they become zombies or are they protected from it. Ferdowsi speculates, "Well, maybe they never were infected in the first place. They're pure breeds or whatever's left behind." Hardwick then suggested a new series of webisodes about what's going on in space, and Alpert joked, "Zombies in space, man, it's awesome." Hardwick added, "There's nothing wrong with space zombies." While Hardwick and Alpert were just kidding around, it does make for a really good idea. Could this be an example where a viewer question actually inspires a future webisode series? Would you like to see space zombies?

The Rings of Power: Netflix Offered More Money for Lord of the Rings Rights Than Amazon

Gundam: The Witch From Mercury Goes Viral Thanks to Its LGBTQ Romance