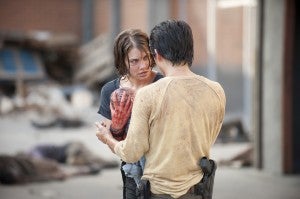 During an interview with the Hero Complex blog for the Los Angeles Times, AMC's The Walking Dead showrunner Glen Mazzara told a reporter that all of the show's writers want to kill baby Judith, and that he's the one keeping her alive, at least for now. "Every single one of my writers has asked us to kill off that baby. I'm dragging my feet. It's difficult to have the baby because you have to worry about where the baby is, why is the baby crying, if the baby's crying is that annoying, that sort of stuff," Mazzara told the blog. "That baby is a victory for this group. Rick set up the mission, saying, We're going to take this prison so that Lori has a place to give birth. And Daryl when he steps up as the leader in Rick's absence, says, We're going to keep this baby alive, we're not losing any more [people]. One of the things that I've been very mindful of is that our group has to have victories. If they are just staying beaten up every week and there's absolutely no win, it's going to feel very, very bleak for the audience. That baby's survival right now is a necessary win because otherwise it is too bleak and that's not something I'm interested in doing. I don't think people will tune in. They'll tune in for an exciting horror show, but they're not going to tune in for a very, very bleak thing that you can't imagine these people are able to survive. I just don't believe that the show can get that bleak." Of course, it's a trope of serialized storytelling that even though most stories take place day-to-day, babies and young children's aging is often accelerated in order to accommodate the larger narrative. As Mazzara points out, kids are hard to write in that they don't have a lot of personality besides "frustrating." On top of that, the baby's death simply cannot happen the way that it did in the comic books anymore, since the TV writers elected to kill Lori (the baby's mother) first. Furthermore, in the same interview, Mazzara seemed to hint that it's possible the story with David Morrissey's the Governor will play out over more than one season. In the comics, it was the Governor who eventually caused the child's death, so the idea of stretching out his story likely stretches out Judith's.

The Walking Dead Writers All Want to Kill the Baby