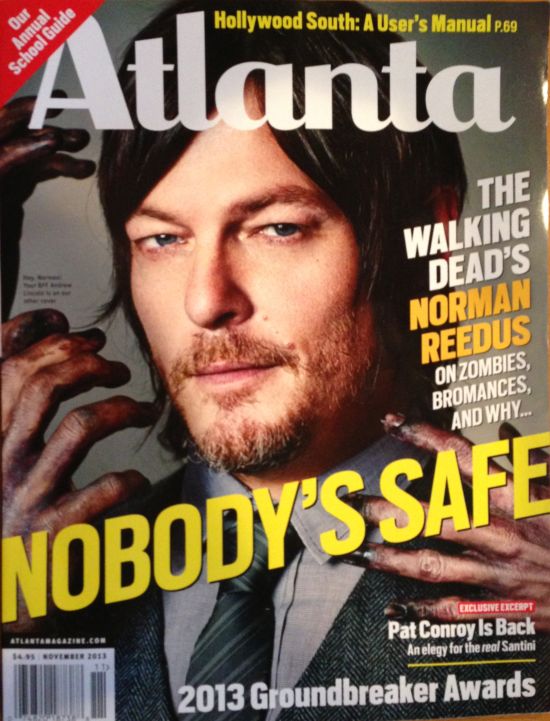 Just received our copy of the November issue of Atlanta Magazine (not sure if it's hit newsstands yet as we're subscribers), and featured on the cover is none other than The Walking Dead's Norman Reedus. There's also apparently an alternative version of the cover which features Andrew Lincoln. A note on the Reedus version of the cover says, "Hey, Norman! Your BFF Andrew Lincoln is on our other cover." In addition to two different covers featuring two different Walking Dead stars, Atlanta Magazine's November issue also features an extensive interview with Norman Reedus and Andrew Lincoln. The article featuring Lincoln and Reedus is called "True Bromance," and they both talk about their friendship and experiences on The Walking Dead. In describing Reedus, Lincoln says, "He's one of the rare people where the more you get to know him, the more is revealed. He's one of the few people that becomes more interesting. He's an extraordinary actor and he does if effortlessly." In describing Lincoln's breakdown scene after Lori dies, Reedus says, "Hands down, that's one of the best acting moments on our show. Ever. I was in the background and it was hard to determine if Daryl felt bad for Rick or if Norman felt bad for Andy. I was choking up, going, 'Man, not my boy Andy.' We're so close."