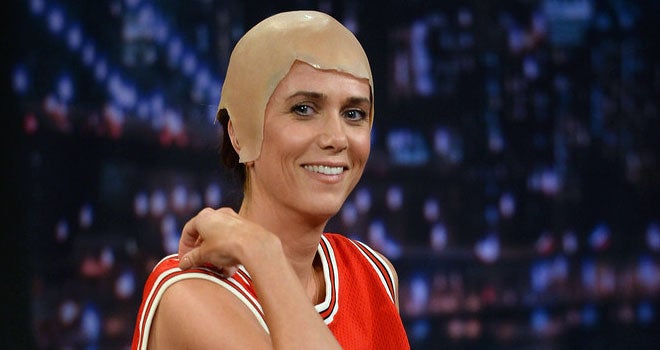 Kristen Wiig, one of the most commonly-rumored candidates to appear in a prospective third Ghostbusters film from Sony, is apparently happy that comedy legend Bill Murray name-dropped her among a number of actresses to potentially star in the film.

Pressed at the Toronto International Film Festival for a reaction to Murray's endorsement,Wiig responded, "That’s very flattering. I guess they’re making one from what I hear, which is pretty great," adding later, “I will do whatever Bill Murray tells me to.”

Along the way, her The Skeleton Twins co-star Bill Hader interjected to try and talk himself into a supporting role "holding her proton pack."

All of this, of course, comes on the heels of reports that Bridesmaids director Paul Feig will direct an all-female Ghostbusters cast; since he's worked with Wiig before, her name had been attached to these rumors even before Murray got involved, but when he was asked about the rumors recently he suggested that Wiig, Melissa McCarthy, Emma Stone and Linda Cardellini would be good candidates.