You better believe it! Funko is getting the anime">anime spirit just in time for the holidays. The toy company has just announced its newest line of POP! figures for Naruto Shippuden, and they are sure to please an ninja-lover you know.

“Be on the lookout for Naruto's exclusive variants, like Naruto in empowered Sage Mode (available only at GameStop), and Naruto in super-empowered Six Paths Sage Mode (exclusively at Hot Topic)!”

If you want to check out the upcoming POP! figures, then you can check out the following slides. The toys are expected to hit shelves in February, so you better use Shunshin no Jutsu then to ensure you snag a piece of ninja history.

First up, fans can get a brand-new iteration of Kakashi. The silver-haired ninja looks none too happy with his slanted eye and clenched fists. The Konoha ninja looks ready to go jutsu-to-jutsu with Madara Uchiha, so fans may want to keep this figure near to ward off the immortal villain. You know, just to be safe.

Shannaro! If you’ve been in the market for a Sakura Haruno figure, then Funko has your back. Their new toy highlights the female ninja’s cropped pink hair, battle gloves, and trendy boot-sandals. If you’re feel inclined, you could even draw a small purple triangle above the heroine’s brow to give Sakura her earned Strength of a Hundred seal back. She did work hard for it, after all.

Oh, Tobi. You were one of the true men of mystery when it came to Naruto. The masked villain was one of the stranger members of Akatsuki, but his quirky charm soon faded when fans learned his true identity. The oddball is none other than Kakashi’s former teammate Obito, and his ocular jutsus are a thing to be feared.

When it comes to Naruto, there’s no one who can stand up to the franchise’s titular hero. Naruto Uzumaki is a force of nature, and his signature Rasengan move aptly shows how destructive the character can be. The move, which was first created by the Fourth Hokage, now lives on forever in this new POP! by Funko. Just, try to avoid having Naruto hit you with the blasted ball.

Who would have thought Naruto would become a true sage? Having trained under Master Jiraiya for years, fans had assumed the blonde-headed ninja would learn something from the Sanin, but it was the sagely toads who brought Naruto into sagehood. The powerful state was won fair and square thanks to the hero’s work, and he even got a pretty sweet coat out of the deal to boot. 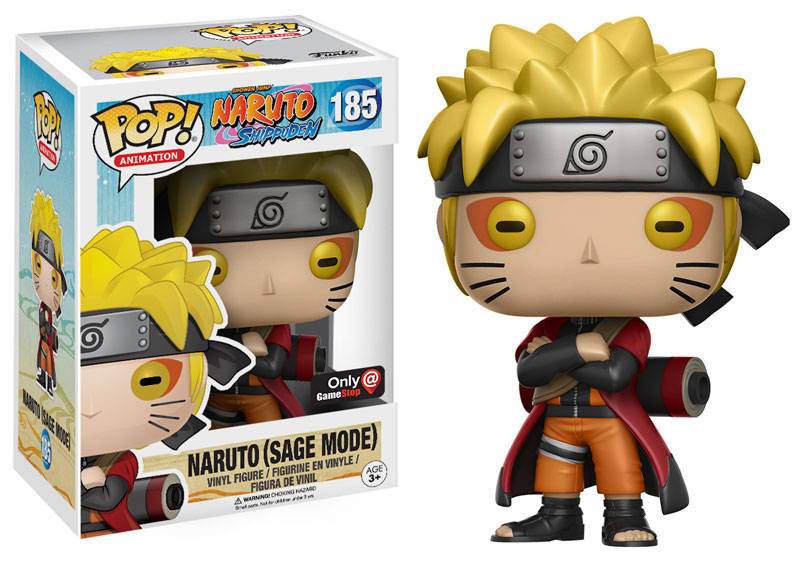 After meeting the fabled Sage of Six Paths, Naruto and his rival Sasuke Uchiha were thrust into an all-new level of power. Funko is honoring the hero’s insane power by selling an exclusive POP! which depicts Naruto in his Six Path transformations. In this mode, Naruto is able to access sage chakra, bijuu chakra, and all the world’s natural energy. Seriously, it is the ultimate hack, and any enemy who steps to Naruto while he is in this form deserves what’s coming to them.