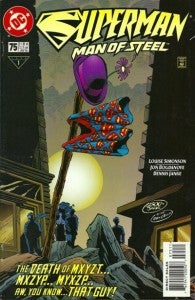 #0, out this week, features a backup feature that deals mostly with reintroducing Captain Comet's world, in that it stars Emery Zackro, a character key to Comet's backstory.

But what's more interesting than that to many longtime Superman readers, is the handful of overt references to classic Superman villain Mr. Mxyzptlk that are tossed out there in the issue.

When Clark gets his first apartment away from Jim Olsen in Metropolis, the landlady is a kindly, aged woman named Mrs. Nyxly. Her husband, a stage magician by who went by the name "Mystic Mister Triple X," was apparently assaulted by rival magicians, leaving his body in a coma and his wife with little to remember him by, except a tacky purple derby hat that was his on-stage trademark.

It's been widely speculated that DC's zero issues, out this month for every ongoing title and even a few that were cancelled, will play into the events that characters will face in their stories going forward. Does this suggest that Mr. Mxyzptlk might be one of the challenges writer Grant Morrison has in the cards for Superman to face before Morrison leaves the title in 2013?

It would be a move that makes sense for Morrison; during his seminal run on Animal Man, he liked to play quite a bit with the concept of characters who were genre-savvy and able to break the fourth wall. Could he get away with that in the New 52? Probably not, but Mxyzptlk, who exists on a "higher plane" and is often able to bring to bear pieces of world-changing information (often for comical effect) would be one of the few characters that might be allowed to get away with it, at least a little.

It's also worth noting that Morrison's first major Superman villain was Brainiac, with the writer returning the character to his alien roots. The "stage magician" backstory given to Mxyzptlk in this new universe is striking in its similarity to that of Milton Fine, a magician "inhabited" by Brainiac in the post-Crisis on Infinite Earths iteration of the character.