Tai, now in high school, feels downhearted that his friends are slowly drifting apart. Meanwhile, strange occurrences are causing electronic devices to malfunction across Odaiba. Minutes before Tai is set to play a soccer match, a Kuwagamon that had been causing the malfunctions materializes and rampages throughout the city. Just as Tai is cornered, his Digivice shines and Agumon appears while digivolving into Greymon to fight the stronger Kuwagamon. As the two Digimon collide through spatial distortions to Haneda Airport, Tai gives chase by hitching a ride with his homeroom teacher, Daigo Nishijima. As more Kuwagamon appear, Tai is joined by the other DigiDestined and their partner Digimon, who defeat two Kuwagamon before Alphamon intervenes and crushes the last one. After the battle, the DigiDestined investigate the circumstances leading up to Kuwagamon's appearance. Tai and Matt pay a visit to Nishijima, who reveals he is part of an organization monitoring Digimon activity. As Izzy develops ways to provide easier access to their partner Digimon and seek out digital disturbances, Tai begins to fear that people could get hurt as a result of his actions as a DigiDestined. Alphamon appears the next day near the Daikanransha, targeting a Digimon under the care of Meiko Mochizuki, a girl who recently transferred into Tai's class. With Alphamon proving too powerful for the other Digimon, Matt urges Tai to stop running away from his fears, and together they manage to drive Alphamon off with the power of Omnimon. Afterwards, Meiko reveals that she is also a DigiDestined and the targeted Digimon is her partner, Meicoomon. 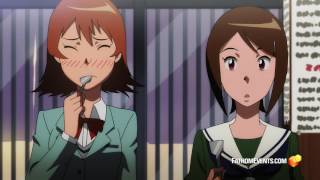