Bloodshot fans better buckle in, because things are about to get crazy!

It all kicks off in Bloodshot Salvation #10, which this century's Bloodshot into the future and face to face with the Bloodshot of the 41st century. Fans were first introduced to this future version of the anti-hero during the 4001 A.D. crossover, and Salvation #10 will bring Bloodshot's past, present, and future into an epic collision with the beginning of Lemire and Braithwaite's new arc "The Book of Revelations"

You can check out the exclusive preview of the issue in the gallery, and the official description can be found below.

"Two thousand years in the future – in the year 4001 A.D. – the man once known as Ray Garrison is no more…but the microscopic nanites inside him live on. Enter Bloodshot 4001 – a strange, gunslinging echo of Bloodshot’s mind, body, and soul that is now more machine than man. But when our century’s Bloodshot finds himself delivered to the dawn of the 41st century with one last mission to fulfill, two Valiant legends will finally come face to face…just as the secret revelation that binds them together across the ages will forever reshape Blood-shot’s place at the center of the Valiant Universe! 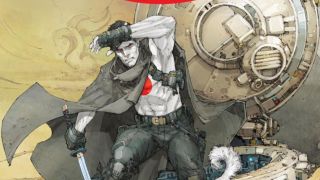 From superstar writer Jeff Lemire (The , Black Hammer) and artistic powerhouse Doug Braithwaite (X-O MANOWAR, Journey into Mystery), Valiant's Eisner Award-nominated superhero saga goes back to the far, far future for the ultimate meeting of man and machine at the crossroads of tomorrow and today!"

Bloodshot fans have a lot to look forward to, but they don't have to wait for things to get interesting. You can check out the official description for next week's Bloodshot Salvation #7 below.

"But first: Jump on board for a breathtaking experiment in comics storytelling on March 7th with BLOODSHOT SALVATION #7 – the year’s most terrifying, most memorable special issue…told entirely in PITCH-BLACK DARKNESS!

Deployed into the demonic realm called Deadside in search of a cure for his ailing infant daughter, Bloodshot has lost the one sense he needs most to navigate the land of the dead: his sight. Blinded with only his four-legged ally, Bloodhound, to aid him, Ray Garrison must fight onward as one man against the darkness – even as he is beset from all sides by a horde of inhuman entities that crave only death, suffering, and slaughter…"

Exclusive Preview - Get Ready For 4001 A.D. In Bloodshot Salvation #10

Corey Graves Explains Why He Blasted WWE Raw on Twitter

The Simpsons: Hank Azaria to No Longer Voice Apu