Writer writers Alex Segura and Michael Moreci with team with with artist Thomas Pitilli and colorist Dee Cunniffe to bring Dick Tracy back to comics in early 2018, launching a new series from Archie Comics which will explore the hard-boiled detective's humble beginnings.

The "Year One" type of story centers on one of pop culture's most iconic detectives in a series the publisher promises will blend the classic Dick Tracy style that readers know and love with a modern and dark noir feel.

"Dick Tracy has always been a character that stands shoulder to shoulder amongst the best--Superman, The Shadow, Conan the Barbarian, Spider-Man, you name it," said Moreci. "There's been so many great Dick Tracy stories over the past 75 years, and that's such a testament to his versatility, his amazing--unbeatable--rogues gallery, and what he represents."

The title will take place in an era appropriate to early Dick Tracy as well, with the publisher revealing that the stories will be set just after World War II, when Tracy first came to The City.

"While everyone is familiar with the established, confident and heroic Tracy, we wanted to give readers a chance to see how all that came to be, and how his Rogues first reared their ugly mugs," Segura explained.

In the first story, due in stores in April, Tracy investigates a deadly shooting that bears the fingerprints of a menacing killer known only as Flattop. The issue will include variant covers by Francesco Francavilla, Kyle Baker, Cat Staggs, and Michael Walsh.

Moreci is known for comics like Hoax Hunters and Suicide Squad: Secret Files. Segura, for his part, is an executive with Archie and has worked on numerous project for the publisher over the last decade or so, including the recently-launched The Archies. They will work with Pitilli, who recently drew a comic based on The CW's hit Archie adaptation Riverdale. 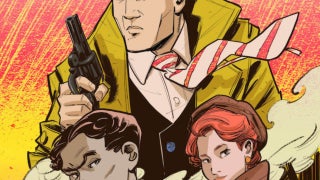 You can check out the solicitation text for Dick Tracy #1 below. The issue will be available on stands and digital platforms April 11.

The legendary detective returns in a dark, noir tale that takes readers back to the very beginning, as we learn about the early days of a man named Dick Tracy, and join his investigation of a deadly shooting that bears the fingerprints of a menacing killer named Flattop! Buckle up for a high-stakes crime adventure in classic Dick Tracy fashion!

New PlayStation Plus Video Games for May Now Available