The Cryonauts woke up to a nightmare, but not all hope is lost just yet, and you can get a glimpse of what happens next in our exclusive preview of Cold War #2.

Cold War #2 comes from AfterShock comics, and as you can see in our new preview, the second issue is just as crazy as the first. The surviving Cryonauts find themselves on the run from a legion of robots, though some of the crew doesn't seem as impressed with the "island of Misfit toys" design of their enemies. Modern design or not, they're still incredibly deadly, and they'll have to get past them to survive.

Well, that is if they don't kill each other first.

You can check out our exclusive preview in the gallery, and the official description can be found below. 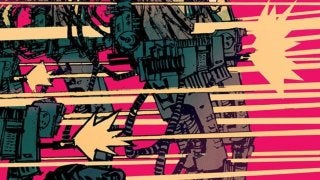 "Second Issue! Their only chance at survival got its head blown off, screaming bodiless robots are after them and enemy forces begin circling for the kill. The Cryonauts scramble for safety from the battlefield, led by kindly grandmother Vinh to higher ground as the dark secrets of this future war and the ones fighting it begin to reveal themselves.

From Christopher Sebela, writer of Blue Beetle, Kiss/Vampirella and Evolution, and Hayden Sherman, artist of The Few andJohn Carter: The End, comes the story that HAD to be told at AfterShock!"

Cold War #1 can be found in comic stores and on digital storefronts now, and you can check out the official description for that below.

"Panacea Cryonics offered its customers life after death by keeping their heads frozen until the day technology could rebuild them, free of disease and death. However, as these everyday people from the past are revived, they're not handed the keys to a new life, but a gun, body armor and an ultimatum. They must fight in a war against unknown opponents for unknown reasons, to secure their place in a brave new world that doesn't want them around."