There are many interesting questions regarding the DC universe, but there's one that has always followed Superman in particular. Now it seems that finally has an answer.

Spoilers incoming for Batman #36, so if you haven't read the issue yet you've been warned.

Superman's disguise has always been a hot topic amongst comic fans, namely because of its simplicity. To hide his identity Kal-El chooses to don thick-rimmed glasses, regular clothes, and at times bad posture to separate his human identity of Clark Kent from Superman. Many have said the get-up is in no way effective, while others have come to its defense. In Batman #36 though, DC clearly sides with the former.

The issue centers around Bruce's recent engagement to Catwoman, as Clark is debating with Lois on whether he should call Bruce or wait for Bruce to call him. The exchange is extremely entertaining, but at one point Lois expresses interest in meeting Selina. Clark is not a fan, saying he doesn't want to let a criminal know their secret. 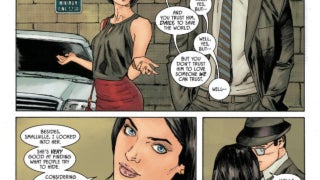 Lois first points out that Bruce is a trusted friend, asking Clark if he trusts her they probably should as well. She sends her point home though with a surprising revelation to Clark.

"Besides, Smallville, I looked into her. She's very good at finding what people try to hide. Considering how you choose to hide your secret, I think she might already know."

Clark asks what that is supposed to mean, and Lois' "Oh sweetie..." segues perfectly into Batman and Catwoman, who are having their own discussion on the rooftops of Gotham City. It's here that Catwoman reveals she indeed already knows Clark's "oh so well hidden" secret.

"Guy who always writes about Superman, who looks just like Superman, but with Glasses and slicked back hair. I'm a thief. I find the hidden things. Remember? I found you. So, all I'm saying is if this is what's holding you back...debating whether or not to tell me about the clever reporters. Darling, I already know."

So, it seems DC is putting the theory of Clark's reporter disguise actually fooling anyone to rest, at least anyone with a modicum of sleuthing ability. Sure Catwoman is a thief and does this type of thing for a living, but it's not hard to make the assumption that others have made the same deduction.

You can view the spoiler images in the gallery.

DC Comics Settles Superman Debate Once And For All