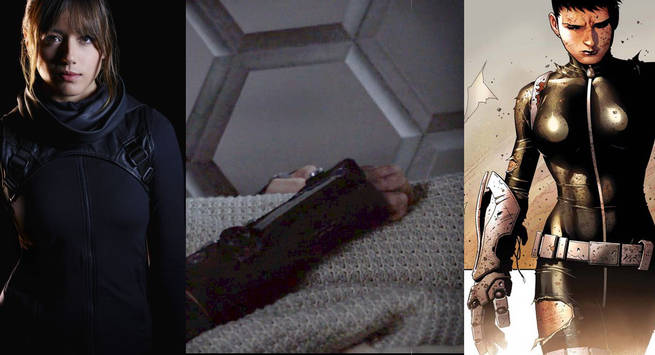 On the episode of Agents of S.H.I.E.L.D., "One of Us," we see Skye's first excursion with the S.H.I.E.L.D. team since being outed as an Inhuman. The mission, while technically successful, did not end well for Skye. She passed out and awoke back at headquarters, fitted with new casts designed by Agent Simmons.

Skye thought she was controlling her newly awakened abilities, which allow her to cause tremors in the surrounding area. In fact, she was directing those vibrations back inwards on herself. The resulting damage showed up as severe bruising on her arms, which is what spurred Simmons to design the casts (you can get a closer look at them in the gallery at the bottom of the page).

But the casts are designed to do more than just heal Skye's current wounds. Simmons also designed them to help minimize damage in the future by siphoning some of that seismic energy. Given what we know about Skye, those casts could eventually become something even more than that.

As we know, Skye's real name is Daisy and she has been confirmed to be the Marvel Cinematic Universe version of Daisy Johnson, a.k.a. Quake. Like her cinematic counterpart, the comic book version of Quake is able to manipulate seismic energy, creating vibrations and earthquakes. The comic book version of Quake, after years of training under Nick Fury, learned to control her powers, and part of her costume is a pair of oversized, energy focusing gauntlets. Could casts Simmons designed eventually prove to be prototypes for Skye's own gauntlets?

As of now, Skye's casts and Quake's gauntlets are used entirely differently. Skye's cast minimizes the damage done to herself by her powers, but Quake's gauntlets don't need to do that because she is naturally immune to her own vibrations. Instead, Quake uses the gauntlets as a way of focusing her seismic energy and manipulating it in more precise ways. Right now, Skye's powers cause uncontrolled earthquakes, whereas Quake is so precise with her abilities that she once exploded Wolverine's heart while it was still in his chest.

So maybe, regardless of whether it's what Simmons envisions for them now, the casts will eventually lead to the gauntlets, which will likely be an even greater help to Skye than they are to Quake. Skye can't stay a ticking time bomb forever, right? And Simmons developing gauntlets to help Skye better channel her new powers would be a great way of symbolizing Simmons' own character arc in regards to Skye's Inhuman nature, growing from apprehension and fear to, presumably, eventual acceptance.