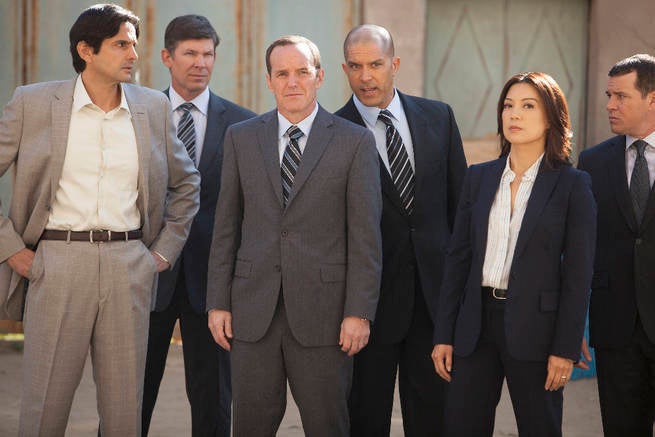 Seven years ago, Melinda May and her husband are in the shower together. They're working on having a family. Afterwards, they're in the kitchen when the doorbell rings. May leaves and tells Andrew to stall him. He tells Coulson to come in and notes that Phil is early, infringing on Andrew's time. Andrew asks who they're going after, and Coulson says he doesn't know but it may be a new patient for Garner. May and Coulson leave together.

In transport, Coulson and May discuss the gifted individual they're going to find. Coulson says they don't know much, but that S.H.I.E.L.D. is retiring this fleet they're with. May says they're sinking every dime into the Triskellion, but Coulson says Fury is quietly funneling funds into an initiative to build a team of powered individuals. Agent Hart enters and describes Eva Belyakov, an index candidate with enhanced strength who has been tracked by Russian intelligence. Coulson and May have been brought in to advise. They're approaching, in public, in Bahrain. May asks what happens if Belyakov doesn't cooperate. Hart says he'll call in the cavalry.

In the present day, Morse and Weaver tell May that they're tailing Fitz. They ask her about Deathlok, but May says Michael Petersen wasn't active and that she doesn't know anything else. They also ask about a program called Theta Protocol, but she knows nothing. May asks to be put in charge of her base so she can talk Coulson in peacefully.

Jiaying talks to Skye about her friends in S.H.I.E.L.D. and their seeming betrayal. Jiaying explains a bit about Skye's powers, which let her sense and manipulate the vibrations in everything. She tries to get Skye to "listen" to a stone. Skye takes the stone in her hand, but hears the mountain in front of them instead. Jiaying tells Skye to amplify the vibration. She reaches out and causes an avalanche on the mountain. Jiaying tells Skye that her powers are not something to be afraid of.

Back in Bahrain, S.H.I.E.L.D. moves in and makes contact with Bahraini national security. May and Coulson approach Belyakov. Coulson says he's here to help her, but Belyakov is suspicious. Locals who look hostile approach. May sees them and sends an agent to intercept. Coulson asks Belyakov what she is looking for. Belyakov says "pain," and sends a table flying. One of the hostile locals takes a young girl hostage, shoots the national security officer, and holes up in a building with Belyakov.

Jiaying brings Skye back to Afterlife and tells her to rest up for more difficult training later in the day, then leaves to take care of something else. Lincoln finds Skye and asks about training, telling her how unusual it is for Jiaying to take someone under her wing since she's in charge of the whole place. Lincoln gives her food and leaves. Skye asks how often Jiaying trains people. Lincoln says this is the first time since he's been at Afterlife.

Morse and May are in flight. Morse probes further about about Theta protocol, saying it's the kind of secret she wants to avoid in S.H.I.E.L.D. May says sometimes the price of doing the right thing is that no one will understand and it hurts like hell.

In Bahrain, May tells Coulson the men are local militia and the building is their stronghold. They make contact, but the militia tells S.H.I.E.L.D. to leave them alone. Hart's team moves in.

Gordon is working with Raina, but she doesn't want training, she wants to leave. Lincoln walks in and tries to talk to Raina, but Gordon doesn't think Lincoln understands what she's going through. Gordon says they'll discuss it later and leaves. Lincoln tells Raina that Gordon means well. Raina talks about the relentless nightmares, the dreams of Skye and her father having dinner with a bouquet on the table. Lincoln tells her not to give up on them yet.

In Bahrain, May and Coulson monitor the assault. Things get chaotic and then the line goes dead. Coulson says he has to call it in, but May says they're alone.

In Afterlife, Jiaying uses glasses of water filled to various different levels to play notes, and tells Skye to match them with her powers. Skye does for a while, like playing music, and then accidently shatters all of the glasses at once. Skye tells Jiaying she feels at home, but she no longer trusts that feeling, having never spent more than two years anywhere, and that she doesn't even know her birthday. Jiaying says this is a safe place, and that Skye's birthday is July 2. Skye realizes that Jiaying is her mother. Jiaying says that joining her people had to be Skye's choice and that this has to be a secret because of her people's strict rules, and that they may perceive Skye as a threat

May returns to base and finds Simmons. May asks what Simmons knows about Deathlok and Theta Protocol, but Simmons knows nothing. May says they need to find out if Morse's people are telling the truth, that Coulson doesn't' go off the reservation without a good reason.

In Bahrain, Coulson recommends to S.H.I.E.L.D. command that May go in to rescue the soldiers. S.H.I.E.L.D. tells him to wait, but once he hears the Bahrainian army coming he sends May in while he stalls the soldiers. May calls Andrew for assistance with a hostage situation. He recommends how to handle the child. May springs into action, scaling the side of the building to get inside and immediately takes out a guard. Her communications with Coulson are offline. She finds Agent Hart, but something is wrong with him and he attacks May. Hart and all the other men start saying "I need your pain, I want your pain." She suspects Belyakov is controlling them all. She gets out of the room and barricades the soldiers inside.

Simmons and May find a whole lot of unknown trips and expenditures in Coulson's records, backing up Bobbi's claims. Simmons also finds evidence that Coulson has been consulting with Gardner behind May's back. May wonders what Coulson needs with 100 bunk beds, and Mack shows up and says he thinks Coulson is building another base, one for powered people. May tells Simmons to open the Toolbox.

Raina asks Gordon to let her leave, but Gordon says she can't. Gordon says he'll take her anywhere, but she can't go somewhere in public. Gordon shares his story of struggling after he lost his eyes. He says Raina just hasn't found the full extent of her gifts yet.

Jiaying and Skye walk through Afterlife. Jiaying says that favoritism will undermine people's trust in her, and that she's already protected her from the punishment that usually comes when someone doesn't get the proper training and processing before undergoing terrigenesis. We see May fighting in Bahrain as Jiaying tells the story of a woman who didn't trust her judgment in the past, and fled Afterlife with a container of terrigen crystals. The woman got caught up with criminals in Bahrain. Her name was Eva, the powered person Coulson and May were tracking. Skye puts the two stories together. Eva says she's getting stronger off everyone's pain. May fights with Eva, but she brings in other men under her thrall and one shoots May in the leg. May uses a splintered piece of wood to kill Eva, but the men stay under the thrall.  Jiaying tells Skye that the crystals were for Eva's daughter, Katya. Jiaying didn't want Katya to go through the mists, having sensed a darkness in her, but Eva wouldn't listen. Katya went insane from her new powers. Just touching someone put them under her thrall. Katya approaches May, to make May her new mother. May begs her to stop. Katya doesn't, and May shoots her. Jiaying says Katya had to be stopped, but it should have been by their own people and not S.H.I.E.L.D. Skye realizes that Jiaying made the rules and now she's afraid other will think she's breaking them for her own daughter. In Bahrain, Jiaying and Gordon watch the aftermath as the men start calling May the Cavalry. May cries for the girl she couldn't save.

At home, Gardner tells May they'll get through this, but May has flashbacks and pulls away from him. Gardner sees her transfer request to Maria Hill that gets her a desk job.

Jiaying explains to Skye that Cal was good once, and that he was only made a monster because of the promise he made Jiaying. Jiaying asks Skye to have one dinner with Cal. After that, Skye never has to see him again. Jiaying says she'll have Cal taken away. Inside, Cal gives Skye flowers and thanks them for giving him another shot. Skye interrupts and says that she learned who her mother was today, and that was only possible because of Cal. Jiaying lies and tells Cal that Skye doesn't know when her birthday is, allowing Cal to tell the story. Cal also reveals that she was born in 1988, making Skye 26 years old, a year older than she thought. Lincoln sees them at dinner and realizes that the scene matches Raina's dreams, and that the dreams are actually prophecies.

Two men wait outside a bathroom. They knock on the door, ask whoever is inside if they're going to be all day. Fitz is inside with the toolbox, and he manages to get it open. He starts searching through files and finds a way to get in touch with Hunter and Coulson. They start to talk about meeting up, but Fitz knows that he's being followed and asks for help shaking the agents. Hunter and Coulson talk him through it.