Marvel fans are expecting to see some exciting new costumes for their favorite Marvel Cinematic Universe heroes in Avengers: Infinity War, and Jeremy Renner is teasing just what kind of new look Hawkeye will get!

Renner posted a shot of himself on the set of Avengers: Infinity War (or possibly its untitled sequel, which is currently starting production), and besides a fancy title logo for the film, we can see teases of what looks to be a drastic new hairstyle for Hawkeye in the film.

Take a look and see for yourself:

As you can see, it seems like Hawkeye will be sporting a mohawk in Avengers: Inifnity War, which would suggest his entire look is going towards something a little more rugged.

When last we left Hawkeye, he was one of the Avengers loyal to Captain America who ended up on the run with Cap after they refused to abide by the Sokovia Accords. A more rugged vagabond look is something that we know Chris Evans' Captain America will be sporting (see the "Nomad Cap" images), so Hawkeye's look echoing a similar theme only makes sense.

Read on for more examples of costume changes we expect to see in Avengers: Infinity War.

After Captain America: Civil War, Steve Rogers has gone underground, but he's still committed to doing good in the world. Since he also left his shield behind with Iron Man, he'll need a new one.

We suspect fans could see a rendition of the recent costume update that debuted with the launch of the Captain America: Steve Rogers comic in May 2016.

Iron Man must have at least two armors in every film.

Avengers: Infinity War will be a cosmic battle, so we expect Tony to learn from his Avengers near-death experience and suit up properly for some outer space travel. 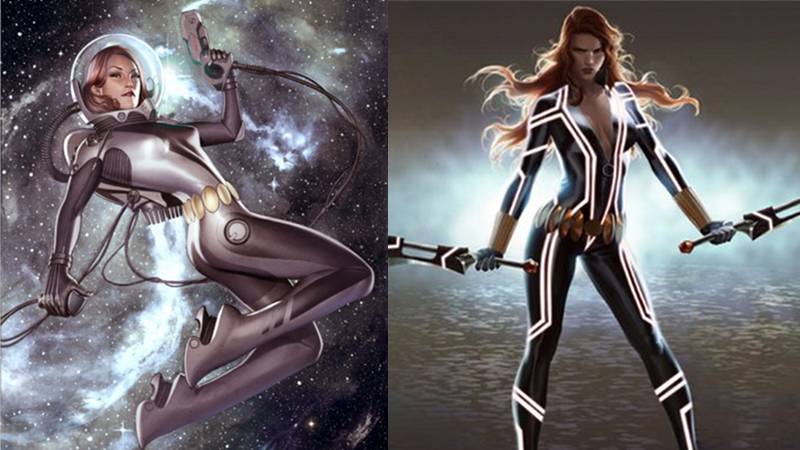 We know she'll start out with a blonde head of hair while on the run with Captain America's underground Avengers, but when the big battle kicks off, she'll need an upgrade.

Widow doesn't get much functional wardrobe in the comics, but with Infinity War involving a cosmic battlefield and unimaginable threats, it'll officially be time for her and Hawkeye to get some combat boosters.

There's the Black Widow space suit by artist Adi Granov that's pretty iconic now, while the "Fear Itself" storyline gave her an Asgardian upgrade that could be adapted for Infinity War as well.

The Vision has become a scene-stealing character, and actor Paul Bettany has continued a fun and interesting arc through the Marvel Cinematic Universe.

Since Vision holds the Mind Stone that Thanos needs to complete the Infinity Gauntlet, we expect the poor guy could be an early victim of Infinity War. If so, he'll need a new body, and his "White" form is the iconic favorite we expect to see.

MCU Hawkeye is a man on the run with a wife and kids to consider, so while he may be compelled to continue being a hero, doing so as Clint Barton is impossible right now.

When Infinity War starts, it wouldn't be surprising if Barton has taken up the Ronin identity similar to how he did in the aftermath of the comic book version of Civil War. In fact, his mohawk look could be a teaser for the full badassery that is to come with a full Ronin transformation.