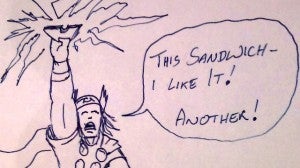 The image at left is one of more than a dozen images drawn by Lars Gronholt, an Australian parent who includes a little superhero-themed note in his daughter's school lunches in hopes of getting her to eat them. Dubbed "Operation Eat Your Damned Lunch," Gronholt posts the images--most of which are pretty funny, and even cuter when viewed in context--on his Flickr page. It's mostly the movie versions of The Avengers who assemble to try and persuade Amelie to eat her lunch, but characters like Batman, Wolverine and Deadpool have had cameo appearances in Operation: EYDL as well. 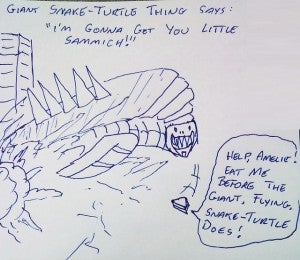 Gronholt posted the link on Reddit, where it has somehwat predictably taken off. Check 'em out, as they're lots of fun. My personal favorite is when he refers to The Leviathan from The Avengers as a "giant snake-turtle thing" and pits his daughter in a raise against the gargantuan monster-aircraft to see who can eat her "sammich" first. But that's just me--lots of people on Reddit love the Batman, Deadpool (does a young kid even know Deadpool? "She does, but hasn't read any of his comics. I show her the occasional PG rated funny," her father says) and Loki ones, which are all pretty inspired. I feel like this is something I may have to do with my kids once they're old enough to appreciate it now (although by then we'll be on something like Avengers 3 and nobody will remember Deadpool...!). And, of course, on Reddit there's this great exchange between Gronholt and another user: GGINQUISITOR: What redditors don't realize is the Amelie is 17 and Dad is like Phil from Modern Family, loving but kinda clingy in a funny way. Gronholt: haha no :P but... I can totally see myself adding these to her Year 12 lunches :D

Avengers Assemble (With Batman and Others) For Girl's School Lunches