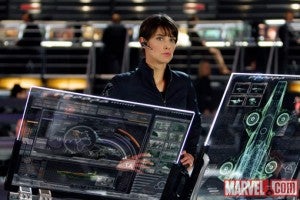 Cobie Smulders, the model-turned-actress who plays Robin Scherbatsky on How I Met Your Mother, was brought into Marvel's The Avengers this year as S.H.I.E.L.D. Agent Maria Hill, a popular character from the comics who nevertheless took a back set to a half-dozen superheroes and recurring S.H.I.E.L.D. operatives Nick Fury (Samuel L. Jackson) and Phil Coulson (Clark Gregg). Well, apparently there's a version of the movie where she's a bigger player, and while a director's cut might not be forthcoming on September's DVD and Blu-Ray release, deleted scenes from the film will be featured on the discs that will showcase Smulders' take on Hill. "Blu-rays are an incredibly important part of the movie process," Marvel's Kevin Feige told Moviehole. "We finished the big-screen release of The Avengers on the Tuesday and we started working on the Blu-ray on Wednesday. It was very immediate. There are a number of deleted scenes and a few storylines that fell by the wayside during the editing process for the big-screen release. However, we are very proud of these scenes and Joss Whedon is very proud of them, too. That's why we're excited that fans will be able to see them on Blu-Ray," he says, and promises "a few more scenes with the S.H.I.E.L.D. agent Maria Hill, played by Cobie Smulders" and "some slightly different versions of Maria Hill and Nick Fury's interaction with the World Security Council, which are great to watch – but there are a number of other fun scenes, too." Of Whedon himself, Feige said he's glad to have the director Marvel exclusive for the next few years. "You have to make sure that it doesn't seem utterly ridiculous that a guy from outer space, a billionaire with a suit of armor and a guy who turns green when he gets upset could all fit into a movie together for people who have never read the books – and that's where Joss Whedon came in. He was able to weave together their stories in a really great way."