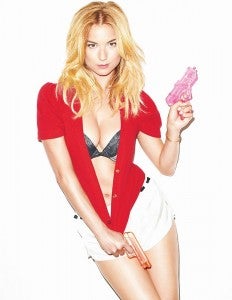 DC Entertainment's Arrow has been called a male-led, superhero-flavored take on Revenge, the hit ABC drama that debuted a year earlier, by a number of fans and critics. Well, now DC's competition in the superhero business have nabbed the original, as Deadline reports that Marvel Studios are set to cast Revenge star Emily VanCamp as Captain America's love interest in the forthcoming sequel, Captain America: The Winter Soldier. VanCamp will play Sharon Carter, a relative of Cap's would-be girlfriend from the first movie and (at least in the comics) a decorated agent of S.H.I.E.L.D. Other S.H.I.E.L.D. agents set to come back to the big screen with this film include Cobie Smulders as Maria Hill; Samuel L. Jackson as Nick Fury; and Scarlett Johansson, who will reprise her Iron Man 2 and Avengers role as Black Widow. Also slated to return is Sebastian Stan as Bucky Barnes; joining the cast will be Anthony Mackie as The Falcon. Phil Coulson, played by Clark Gregg, will reportedly not show up in the film, focusing his efforts on Marvel's S.H.I.E.L.D., also for ABC (though if that pilot doesn't go to series, anything could happen). The story, at least inasmuch as it will stay true to the comics it's based on, will revolve around Captain America's former sidekick who, rather than dying at the end of the first film has actually been held in cryogenic freeze by the Russian government, and occasionally revived to act as a deadly agent of their government. When he goes rogue, Captain Americabecomes involved. The film has been described as a spy thriller by those close to the production. Captain America: The Winter Soldier starts shooting soon for a release on April 4, 2014.

Avengers: Endgame Producer Was Worried All-Women Team Up Scene Would Be "Pandering"

Marvel Announces New What If...? Assembled Episode With New Trailer