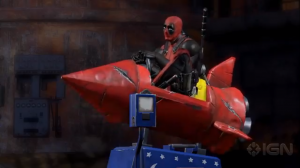 "Deadpool makes Spider-Man look like a bike cop" might be the best fake review for a video game ever--and it's part of the parade of mayhem that's brought on by the debut of a new trailer for Deadpool: The Game, available later this year on PlayStation 3 and Xbox 360. The Merc With a Mouth has...plenty of mouth, as he rambles through the entire trailer, stopping only occasionally to let some other comical caption or effect take center stage. The game comes off more or less like you'd expect a Deadpool video game to: it's goofy, strange and incredibly violent. It's interesting because while most superhero games keeep the personalities pretty generic and focus on gameplay, this one seems to understand that the real value of Deadpool as an intelletual property lies in his offbeat characterization.