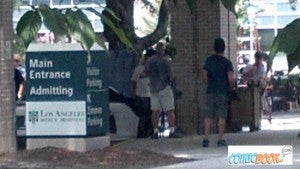 Sent to us from a reader, check out these exclusive photos from the set if Iron Man 3, where the New Hanover Regional Medical Center in North Carolina has been redressed as Los Angeles Mercy Hospital for the shoot. According to people on the scene, Gwyneth Paltrow appears to be inside, while a stunt double for Robert Downey, Jr. is outside the building doing some shooting. No word on any other characters who might be present for the scene, but Tony Stark's Audi R8 was there earlier today, so its' a safe bet that he's going to be on-hand. For what? Hard to say. It's unlikely the scene takes place after the reported car chase, since the R8 was in pristine condition when activity was happening around it. There are apparently a lot of guys in suits, though, suggesting a connection either to the Secret Service who reportedly were in earlier scenes, or perhaps just that Tony is there on business (Extremis-related business...?). Security is pretty tight, so anything more revealing than that is pretty unlikely to come out of the shoot, but if we hear anything, so will you. The shoot will reportedly move to another local business later in the day, and our scooper will try to be there. [gallery link="file" order="DESC" orderby="title"]

Iron Man 3: Pepper Potts at the Hospital, Exclusive Photos From the Set