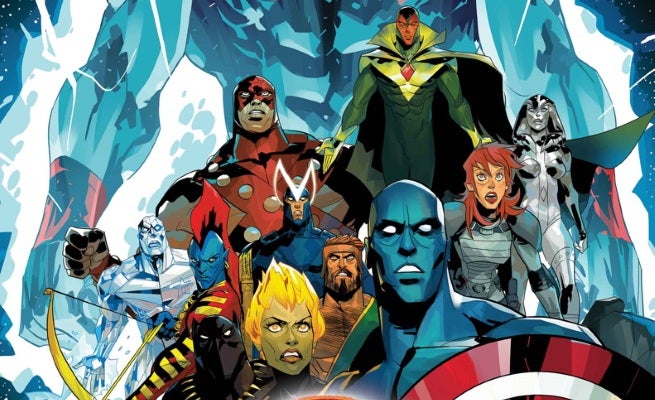 Marvel Comics has announced a new Secret Wars series that revisits the Korvac Saga. The series will be written by Dan Abnett, and feature the team of Guardians of the Galaxy currently starring in Abnett's Guardians 3000 series.

The new series casts Korvac as the ruler for a Battleworld region called Forest Hills, with the Guardians of the Galaxy serving him. Korvac comes into conflict with a neighboring region that is ruled by Wonder Man, who has the Avengers as his own servants.

Speaking to Newsarama, Abnett talked about Korvac's history and what it mean for the new series.

"Michael Korvac was originally a villain, but he became more complex than that in the classic Avengers 'Korvac Saga' (by George Perez and others)," Abnett says. "He was a god-like, Beyonder-level cosmic force who wanted to challenge the great cosmic powers and bring order to the Universe. He was almost a force for good… except that he was ruthless and capricious. Trying to stop him, the Avengers and the Guardians all died… no kidding. Korvac restored them because he regretted his actions and saw what he had become, and then negate himself so as not to risk endangering the Universe with his power.

"It's that Korvac we're dealing with: noble, determined, high-minded and essentially trying to rule fairly and justly, and look after this people," Abnett continues. "He's not a bad guy. The Guardians are his police, his bodyguards, his retainers. They are loyal to him because they believe in him. But there's a dark, dark menace arising in his kingdom that threatens his rule, his people, a lot more besides…"

The series will be illustrated by Otto Schmidt, and you can see some of Schmidt's concept art in the gallery below.