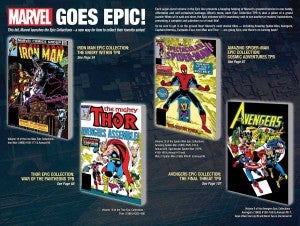 Sadly, Marvel is not going back to collect comics previously published under the defunct Epic Comics. But what they are doing, under the name of Epic Collections, is reprinting good-sized stories from the days before trade paperback collections were commonplace, beginning with Iron Man: The Enemy Within, Thor: War of the Pantheons, Spider-Man: Cosmic Adventures and The Avengers: The Final Threat. "List price will range on these from $34.99 to $39.99 depending on a variety of things," Marvel SVP of Sales David Gabriel told CollectedEditions.com. "The normal top of the line restoration that folks have come to enjoy from Marvel will be a part of this line -- as seen in recent oversized TPBs like Avengers: The Trial of Yellowjacket or Incredible Hulk: Pardoned." Each of the books will collect roughly 20 issues of the long-running series, and instead of starting from the beginning (something DC has done with many of its Golden and Silver Age reprint programs), Marvel has elected to start with in-demand stories from whenever they take place. It's a move that suggests the line won't be for completists looking to own every issue, but rather for hardcore fans who want their favorite eras of the books ready at hand. Or, you know, comics bloggers who need to have that stuff for reference.