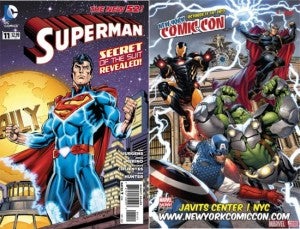 Of course, a lot of the longtime fans opposed to any sort of change would likely take the position that our question would really be whose costumes are worse, but the idea remains the same: with both major American comics publishers relaunching and renumbering their core line of superhero titles, reimagining many of their characters' iconic looks for the future, who's doing a better job of it? Let's try some apples-to-apples comparisons. Superman vs. The Hulk Obviously, it's all about the armor. Much has been made of the fact that putting armor on characters who are essentially godlike in their level of invulnerability makes them seem more vulnerable and less formidable. I'm not sure I agree, but in any case, I'd put it forth that Superman does it better. Why? Well, because first of all, he's got a power set and a background that allow for it. Also a personality, since the shifting nature of the costume works well for a quick change from Clark to Superman. The Hulk? His only power is that he's a tank. Putting armor on the tank might sound like it makes sense in the abstract but it's an unnecessary distraction. Also, why the heck would he have it in-story? Makes no sense. Batman vs. Captain America Captain America gets the movie version of his costume, while Batman simply adds a few seams here and there. Sounds to me like Cap makes out like a bandit there; at least his changes can be justified and explained in-story, where Batman's just boils down to "I wanted a new look." Wonder Woman vs. The Scarlet Witch Arguably the most powerful women in their respective universes, give or take a Pandora or Phoenix here and there, both of these characters got costume tweaks that appear intended to make them less sexualized and more ready for battle (while still retaining the tiara). Wonder Woman, though, retains the old  bikini look (in spite of earlier drafts that ditched it) while Wanda takes on a look that's more reminiscent of Rachel Rising's Lilith or even DC's Pandora. That fits her character well, but is hardly distinctive or iconic. Wonder Woman walks away with this one on the grounds that she's immediately recognizable from 20 paces. Thor vs. Cyborg Both of these are somewhat different, but neither has exactly sent shockwaves through the fan community. Why not? The characters' looks have changed so frequently over the years that the only real standard they can be held to is that they're recognizable to fans. In that respect, this one's a draw. Iron Man vs. The Flash The diffferences in their costumes are so small it's barely worth noting, except that This version of The Flash hadn't changed since the '50s and Iron Man's got, essentially, his movie costume. I awnt to say Iron Man's better, since he's always changing and so it seems less forced, but the color scheme just feels wrong. I'll go with Flash on this one.

Marvel NOW! and the New 52: Whose New Costumes Are Better?