Sideshow Collectibles is set to deliver a gorgeous new Spider-Man statue to its premium format line, and we've got your first look at just how impressive it is.

The good news is that you don't have to take our word for it, as Sideshow has revealed three beautiful new images of its upcoming Spider-Man premium format figure. This statue is of course based on the Miles Morales version of Spider-Man and features the wall-crawler springboarding off of a surprising base to vault himself forward.

Oh, and that surprising base? That would be none other than Venom, whose jaws are open wide to snap the moment Spider-Man gets too close. The base is made up of Venom's neck and head, with symbiote tendrils swirling around Spidey as they attempt to bring the web-slinger down. The mouth itself features some incredible detail, delivering a rather disturbing likeness to the inside of Venom's mouth and his trademark tongue.

Even better still is that the Sideshow Exclusive version features a swap out portrait of Miles, and the likeness to his portrayal in the comics is dead on. This version also features what appears to be a swap out hand, which is holding his Spider-Man mask. All in all, this is incredibly impressive, and you can check out the new statue in the gallery and in the photo above. 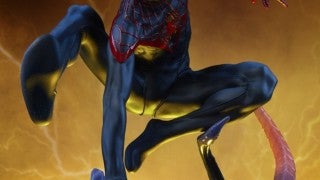 The Spider-Man Miles Morales premium format figure will go up for pre-order soon, but the full release date for the statue isn't known at this time.

You can also catch Miles Morales in his monthly series from Marvel Comics, which is written by Brian Michael Bendis with art by Oscar Bazaldua. The official description for Spider-Man #239 is included below.

"His Sinister Six is turning on him, and his nephew (SPIDER-MAN) can't turn a blind eye to his crimes. The IRON SPIDER is going down! But how far? And how far will Miles go to avoid losing his uncle again? And you won't believe what Miles' parents are planning for his future!"