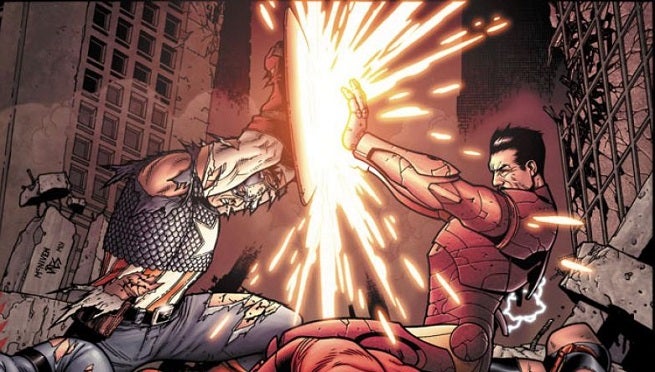 With reports that Robert Downey, Jr. will join up with Captain America 3 as a villain, it seems that Marvel's controversial and best-selling Civil War storyline is finally coming to the movies.

So...what does that mean for your favorite characters, and for what comes next?

Chris Evans talked about his desire to quit acting and focus primarily on his work behind the camera, and Sebastian Stan, signed to play Bucky Barnes in Captain America: The First Avenger, reportedly had a multi-picture deal that was, unlike Evans's, not on the brink of expiration.

There have also been rumors that Civil War was a thing they eventually wanted to build toward, but with the assumption that it would be in an Avengers movie, nobody could quite figure out a timeline that made sense, unless it was pushing aside the Thanos storyline for Avengers 3 and using Evans's last contracted movie to tell the tale and potentially kill him off. That Robert Downey, Jr. didn't plan on any further appearances as Iron Man seemed to sell the notion.

What changed, then, is that Downey has always liked the character of Stark and one of the reasons he didn't particularly want to sign on for more was that it seemed like Iron Man 3 left him in a very logical place. One assumes he perceived the Avengers films as little more than popcorn action that extended that status quo, until somebody came to him with what's now rumored to be the plot of Captain America 3: that following the events of Avengers: Age of Ultron, Tony feels responsible for having created the threat that almost wiped out humanity and gets on board with a government-sponsored Registration Act for superhumans.

This actually kind of makes more sense than the way they did it in the comics, for a few reasons.

The first is simple: Tony's motivation isn't so mind-bending. In the comics, superheroes are involved in a catastrophe that claims the lives of a number of schoolchildren. It's tragic, but Tony and the Avengers weren't involved in any way and ultimately the idea of Iron Man getting berated into a major change in his philosophy by a soccer mom who spat in his face seemed...odd. Being responsible for the birth of Ultron is more personal, more immediate and more global. Tony Stark is a guy who can see the big picture and it's hard to imagine one tragedy totally reshaping him when he's lived through so many.

Second, the "Age of Miracles" starts at the end of Captain America: The Winter Soldier, introducing Scarlet Witch and Quicksilver. It still seems they've been experimented on, but given the characters in question, it doesn't seem impossible that they could be a first guard of people who are either born with powers or who spontaneously manifest them without drug enhancements, suits of armor or industrial accidents to kickstart something. The idea that there are now people who are innately powerful -- a key source of conflict in the X-Men books for years -- could plausibly throw a control freak like Stark into a panic.

Giving Tony an understandable trauma and motivation is key to making Civil War work in a cinematic universe where Downey has become the face of Marvel Studios. Even if you offhandedly call him "the villain" of Cap 3, it would be unwise to tear down all the goodwill Marvel has created with Downey and Tony Stark in the films the way they did in the comics, where Stark and his pro-registration side came off pretty badly.

There will have to be a number of major changes made for Civil War to make sense in the cinematic context. First of all, there are far fewer superheroes -- and of the ones that do exist, Spider-Man played a big role in the comics and won't (presumably) be appearing in the movie.

There's also the matter of Thor, who was dead at the time. It seems easy enough to work around that -- either don't use him or don't address that he was dead -- but Stark created a clone of Thor to use in the fight against anti-registration forces led by Captain America...and it killed another superhero. It was arguably the key emotional beat of Civil War and there's really just no good way to make it happen onscreen without permanently compromising the Iron Man and Thor franchises. One of the things about comics is that they've got decades of history behind them and a new installment out in just a few weeks. With movies, that's not true, and every action your heroes take has long-term meaning.

Of course, The Winter Soldier didn't adapt much of the storyline it's named after and Age of Ultron literally has nothing in common with the comic book series of the same name except that Ultron is actually in it. That means they're not going to feel much obligation to hit anything but the broad strokes with this Civil War adaptation.

We're hoping we at least get the classic Cap speech, of course... 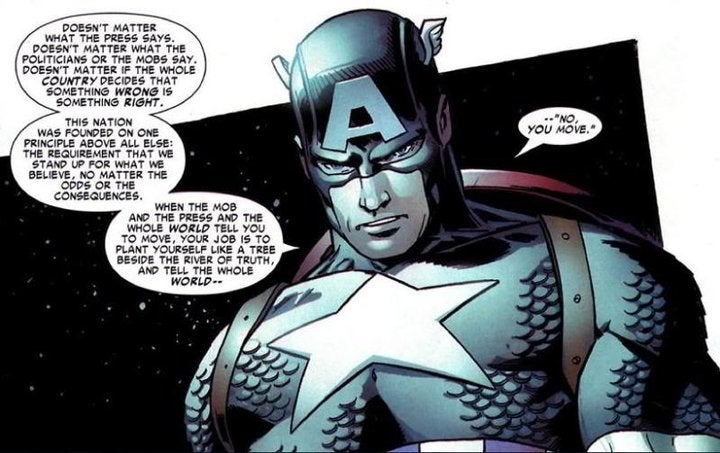 ...if for no other reason that it would be a crime not to let Chris Evans deliver those lines.

This story is clearly one that's been on Marvel's mind for a while; Kevin Feige has mentioned it in the past as something that he'd be interested in taking on at some point, while Anthony Mackie -- quizzed on the recent move to make his character Sam Wilson into Captain Americain the comics -- said that he was "excited to see Sebastian play Cap."

And, yes, if you haven't read the comics: following the events of Civil War, the pro-registration side wins and Captain America surrenders himself to face trial and avoid further violence. En route to the courthouse, the Red Skull and Crossbones (villains who appeared in the frist two Captain America movies) execute a plan to assassinate Captain America, resulting in a period of time where Steve Rogers is dead and Bucky Barnes takes on the role of Captain America to bring the kilelrs to justice. When Steve first returned, he wook on a costume that more closely resembled his Winter Solder suit from the movies -- but without a mask -- and took over for Nick Fury as head of S.H.I.E.L.D., a job he took from Iron Man. 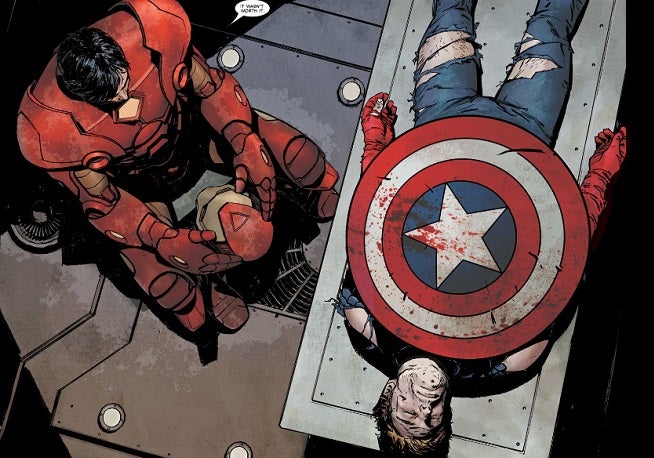 Because, yes, Iron Man inherited control of much of America's intelligence apparatus in the wake of Civil War. Of course, he had to share control with Green Goblin (long story), which led to a bit of conflict, but it's unlikely they'll do that part of it here, partially becuase he's a Spider-Man character whose rights rest at Sony and partially becuase they just did a "the bad guys are in charge of S.H.I.E.L.D." story and two in a short period of time might lead fans to really question the viability of S.H.I.E.L.D., not something you want when you've got the agency headlining a network TV show.

In the context of the movies, it looks like the whole thing will play out on a much smaller scale, but it does make sense to use Captain America 3 to restabilize the S.H.I.E.L.D. status quo they upset in the second film. It also wouldn't be surprising to see Captain America die, since it's a key part of not one but two ongoing concepts being played out in the Marvel Cinematic Universe (the Winter Soldier story and the Civil War story) and since using Civil War or Fallen Son as the title of a Captain America movie would more or less demand he die, even if the rest of the adaptation is very loose.

What gets us there? Well, we'll find out in just over six months as Age of Ultron brings Marvel's Cinematic Phase Two to a close...!

What Those Captain America 3 Spoilers Mean For Future Marvel Movies