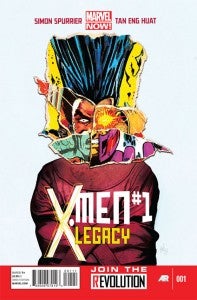 Marvel Comics released a trailer yesterday for the upcoming Marvel NOW! relaunch of X-Men Legacy by Si Spurrier and Tan Eng Huat. Starring Legion, the son of the late Professor Charles Xavier, this comic literally tells the story of the next generation of X-Men. Where do the mutants go, following the events of Avengers vs. X-Men? Legion has to figure that out while trying to keep his powers in check and dealing with the loss of his father. The series began this month!

The Future of X-MEN LEGACY Is Marvel NOW!

This November, prepare for an all new chapter of the X-Men mythos in X-Men Legacy #1, kicking off the all-new ongoing series from acclaimed writer Simon Spurrier and Eisner Award Winning artist Tan Eng Huat! Legion, the most powerful and unstable mutant in the world and son to Professor Charles Xavier, has killed gods and reshaped the face of the universe. NOW! in the aftermath of Avengers vs. X-Men, Legion will finally attempt to conquer his demons and establish his place among mutantkind! An all-new direction! All-new threats! All-new vision! This is X-Men Legacy NOW! This November, Simon Spurrier and Tan Eng Huat redefine what it means to be an X-Man in X-Men Legacy #1!  For more on Marvel NOW!, please visit now.marvel.com and join the conversation on Twitter using #MarvelNOW X-MEN LEGACY #1 Written by SIMON SPURRIER Art by TAN ENG HUAT Cover by MIKE DEL MUNDO ON SALE NOW!