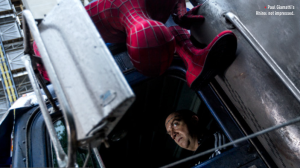 The trailer for The Amazing Spider-Man 2 will reportedly be attached to prints of the upcoming November releases Thor: The Dark World and The Hunger Games: Catching Fire. That's according to this tweet from Brainztown, who reportedly works on music for the film's trailer and other cues in the film. "[The trailer] will be played against The showing of Thor and Hunger Games this year and the front of next year with May 2014 release," tweeted the musician. Brianztown has also worked as a music producer for Jamie Foxx, P!NK, Quentin Tarantino, BabyFace, Snoop Dogg and Common, according to his Twitter profile. The first official footage for The Amazing Spider-Man 2 was screened in July at San Diego Comic Con International.