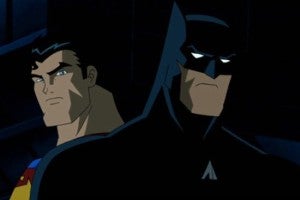 Following last week's announcement that Ben Affleck would star as Batman in the Batman vs. Superman movie, the reality seemed to hit a lot of our readers that Warner Bros. and Zack Snyder were moving on from the Christopher Nolan-directed Dark Knight Trilogy and taking on a new iteration of Batman. Lost in a flood of Affleck hate were a number of comments that sounded a bit like, "But wait--shouldn't they wait a little bit longer to use this character again?" That's often followed by the observation that because the previous franchise was so popular, it may cause some confusion to have somebody else taking up the reins only three years later, especially since it won't be an origin story. It's something that some people have been saying ever since rumors first surfaced that Batman would be rebooted in 2015 or so, but it really reached a fever pitch after the Affleck casting as, it seemed, some fans realized for the first time that it would likely be a major tonal shift from the critically-acclaimed and massively successful Nolan films. Here's the thing: All that's happened here is that the films are beginning to reflect the comic book source material. After Geoff Johns spent a decade making Green Lantern one of DC's best-loved and best-selling franchises, he left and the next month, the financial realities of mainstream comics publishing  took over and the next month, Robert Venditti was writing the comic. There wasn't a pause to acknowledge that fans and critics would really miss Johns; there wasn't some kind of big, bold note in the inside cover to alert readers to the fact that they were or were not reading "the same" Green Lantern anymore. It's the same with Christopher Nolan's Batman; the primary difference is that the structure of that story cuts it off intentionally from future iterations, separating it from the next iteration, while the comics (be it Johns's Green Lantern run or Morrison's Batman) tend to carry the continuity over from one story or creator over to the next.

Batfleck Confirms Comics Are Taking Over Hollywood: Change Is Immediate