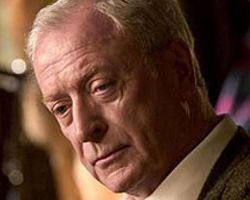 In an interview with Collider, British actor Michael Caine discussed his involvement in the third installment of the rebooted Batman franchise, that is, if he lives that long.

The actor told Collider that it's been extremely hard to find great film roles in which to further his illustrious career. "I finished this last picture, as I said. I don't have another picture to do. If a script doesn't come, then I won't do anything and I'll be retired." That doesn't mean he's ready to say no to anything that comes his way, especially if it's a third Batman movie.

"Yes, if they do another one, I'll probably be the butler. I hope I'm still alive," he said. The actor went on to say that at his current age of 76, he was still 8 years younger than Michael Cough when he last played the role of Alfred in the disastrous Batman and Robin.

Caine went on to discuss some of the rumors surrounding the third installment into the DC Comics franchise. Earlier, the actor told MTV News that Johnny Depp was on board to play the Riddler with Phillip Seymour Hoffman tackling the role of the Penguin. Both Hoffman and The Dark Knight screenwriter, David Goyer quickly rebuked the rumors. However, in his most recent interview, Caine insisted that at least one of the two villains that he had mentioned earlier was still set to menace Gotham City in the near future, adding, "That would be probably The Riddler."

Whoever it is that is chosen to play the next Batman villain, Caine speculated that they have the arduous task of filling some very big shoes. "I thought it would be a tough act to follow for anybody who played against The Joker after Jack Nicholson. You know what I'm saying? Heath is The Joker," he said. Now, that's a statement that I don't think anyone's going to disagree with.

Batman 3 Could Be Michael Caine's Swansong