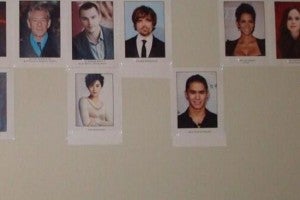 Earlier today, director Bryan Singer tweeted a photo of the cast of X-Men Days of Future Past. While most of the cast photos were of previously announced cast members, there were three new cast members confirmed. While we were able to immediately identify Daniel Cudmore since he played Colossus in previous X-Men movies, the other two new cast members were a little more tricky. After combing through images on Google Images, we finally found a match for the two cast members. Boo Boo Stewart & Fan BingBing are the two new cast members for X-Men Days of Future Past that have not appeared in previous X-Men movies. Since this will mark their first appearance in a X-Men movie, their roles are unknown. Interestingly enough, Fan BingBing is a Chinese actress who is also set to appear in this summer's Iron Man 3. Could it be that she's part of establishing the rumored shared Marvel Cinematic Universe between Sony, 20th Century Fox, and Disney? Or is it just that 20th Century Fox figures her casting will help in getting the film released in China?