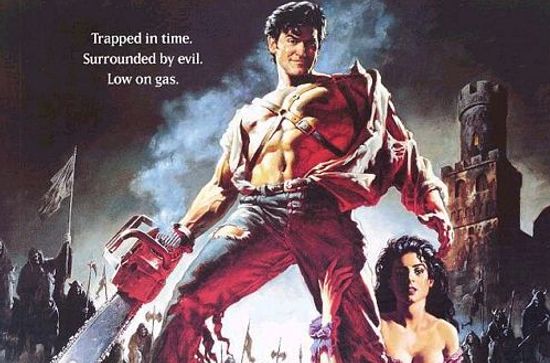 Seems our scoop on Bruce Campbell confirming at the Wizard World Nashville Comic Con that he will be doing an Army Of Darkness sequel has generated quite a bit of buzz online. Some have wondered if Campbell might have been joking, when he gave his "yes" confirmation. While it's true that Campbell joked around a lot during a very entertaining panel, his final answer about Army Of Darkness came across to me as a serious answer, but I've included video below so you can judge for yourself. I was sitting a couple rows back so the video is not great quality, which is why I didn't post it to begin with. There was another point in the panel where Campbell jokingly said the audience had determined that Sam Axe was getting his own show on USA Network. But immediately after making that joke, he clarified "There are no official plans." The fact that he actually clarified that Sam Axe was not getting his own show actually makes me think that he wouldn't have said "yes" about the Army Of Darkness sequel if he wasn't intending on doing it. Whether there will actually be an Army Of Darkness sequel, we do not know. There have been a couple of other previous reports online that indicated Sam Raimi was moving forward with one. What hadn't been confirmed until our report was whether Campbell was interested in doing the sequel. It certainly appears as if he is, so if the earlier reports of Raimi's interest are accurate, then odds would seem to be in favor of a sequel actually getting made.