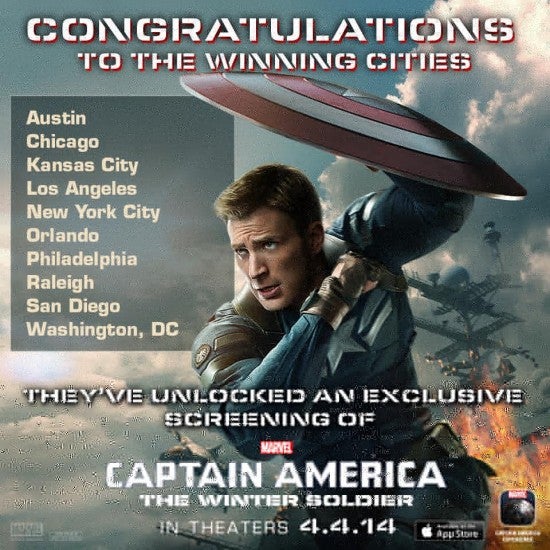 Marvel Studios have announced ten winning cities who will qualify for special fans-only pre-screenings of Captain America: The Winter Soldier. The cities are Austin, Chicago, Kansas City, Los Angeles, New York, Orlando, Philadelphia, Raleigh, San Diego and Washington, D.C. Details on how to buy tickets will be released on March 14. Here's the official statement from the Captain America Facebook page: We're pleased to announce the winning cities of Marvel's "Captain America: The Winter Soldier" early fan screenings! All screenings will be fulfilled on March 20, and a reservation system will be available the morning of March 14. You'll have to RSVP fast, as tickets are first come, first served. Check back on the Friday, March 14 for all the details!

, Marvel teased that fans needed to download the new Captain America Experience App and capture themselves with the First Avenger. Then, they needed to share their 3D photo via Twitter or Instagram with the #CaptainAmerica hashtag and a city in Marvel's list for a chance to unlock one of the 10 early fan screenings.