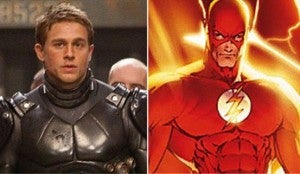 While Warner Bros. has yet to officially announce a Justice League movie, Warner Bros. President Jeff Robinov recently confirmed that Man of Steel lays the groundwork for a Justice League movie. In the scenario that seems to be most often hinted at by those attached to the Man of Steel, Henry Cavill would reprise his role as Superman in a Justice League movie, but new actors would likely be cast in all the other roles. There is a slim chance that previous actors could return to play the Batman and Green Lantern roles, but the roles of Flash and Wonder Woman would have to be cast from scratch. Now, CHUD.com is reporting that they have an inside tip on who might be under consideration for the role of Flash. Warner Bros. is reportedly pleased with Guillermo Del Toro's Pacific Rim, which will be released this summer. Charlie Hunnam, who stars in Pacific Rim, also reportedly got along well with director Guillermo Del Toro. In fact, Del Toro has already cast Hunnam in a role in his next movie Crimson Peak. While CHUD.com notes that Charlie Hunnam would be ideal to play John Constantine in Del Toro's Justice League Dark movie, it's another role that they suggest Warner Bros. is actively considering Hunnam for. According to CHUD.com sources, Warner Bros. has developed conceptual art using Charlie Hunnam's likeness as the Flash for the Justice League movie. However, there are no pictures of the conceptual art to prove the rumor. If the art exists, it's also possible that the artist just used Hunnam's likeness and it has nothing to do with Warner Bros. considering him for the role. Still, we could see how Warner Bros. would be considering Charlie Hunnam for the role, particularly if they are pleased with his performance in Pacific Rim.