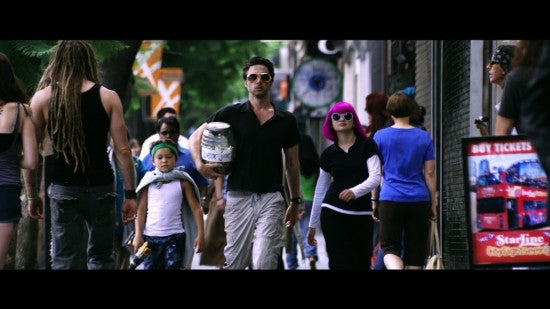 Zach Braff's Kickstarter-funded feature film Wish I Was Here has been added to the lineup at the famed Sundance Film Festival, where the film--partially shot this summer at San Diego Comic Con International--will share the festival stage with fanboy-favorite Clerks, celebrating its twentieth anniversary as part of the Festival's "Class of 1994" retrospective. Wish I Was Here generated more than $3 million after a controversial Kickstarter campaign launched in the wake of the massively successful Veronica Mars movie fundraiser on the site. Ten years ago, Braff's directorial debut, Garden State, also debuted at Sundance; this latest film is the veteran actor's second as a director. In a brief statement on his Kickstarter page, Braff announced the move: I am so proud to announce that "Wish I Was Here" will have its world premiere at the Sundance Film Festival! It is quite an honor. It means so much to me to premiere this film at the very same festival where I premiered "Garden State" exactly ten years ago. And, we would have never gotten here without your support. Also announced today was that Clerks, which debuted at Sundance 20 years ago and launched the career of indie film icon Kevin Smith, will also play in a special midnight screening as part of Sundance's "Class of 1994" retrospective, which will also screen Hoop Dreams. In both cases, the filmmakers will be on hand to talk with audiences after the presentations, which will take place January 20 for Hoop Dreams and January 24 for Clerks. A third film in Smith's Clerks cycle is expected soon.