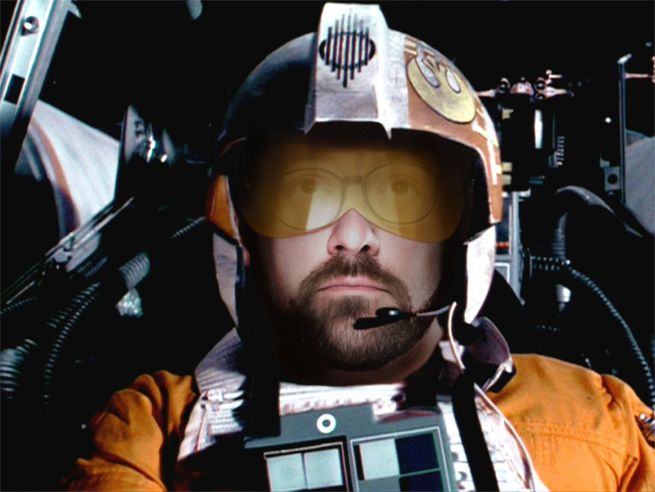 On Hollywood Babble-On, Ralph Garman and Kevin Smith sometimes read stuff sent in by listeners. On the most recent episode of Hollywood Babble-On, a listener wrote, "Mounting evidence of why Ralph couldn't be on the set with Kevin when he went to Star Wars Episode VII…Kevin is in it."

What the listener was referring to is that when Star Wars Episode VII director J.J. Abrams invited Smith to visit the set while he was in the UK, the director insisted that Smith come alone and wouldn't allow him to bring Garman along. Now, it could be that Abrams just limited it to Smith because of the secretive nature of the film, but the listener thinks something else could have been at play.

In response to the statement, Garman said, "Well, let's see if there's actual evidence to that fact." Then, Garman showed a photo-shopped picture of Kevin Smith as an X-Wing fighter. Smith laughed about the photo, but he didn't comment definitively one way or the other in regards to if he might be in Star Wars Episode VII.

While Garman and Smith played the whole thing off as a joke, the listener did raise an interesting question. Abrams could have easily forced Garman to sign an NDA as well and allowed him to visit the set. What if Abrams did give Smith the chance to have a cameo as some minor character in the Star Wars universe? And even if Abrams hadn't been planning to make the offer, could Smith have pleaded his way in once he made it on set? With all the interesting aliens, creatures, and droids in Star Wars, Smith could have a cameo with viewers not ever realizing it was him.

Could the ultimate fanboy have made it into Star Wars Episode VII?

Could Kevin Smith Be In Star Wars Episode VII?